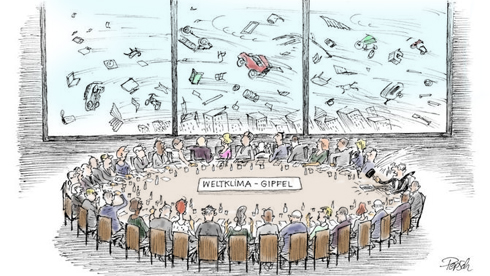 Poor forecast for the climate

The 2013 United Nations Climate Change Conference is under way in Warsaw but chances are slim that decision-makers will be able to overcome the current stalemate on reforms to cut the pace of the global warming. A Polityka columnist explains why.

The climate is changing, global temperatures are rising, and the main culprit is man, who, since the beginning of the industrial revolution, has been emitting more and more greenhouse gasses into the atmosphere.

Carbon dioxide from the combustion of fossil fuels, methane emissions from the meat industry, nitrogen oxides, hydrofluorocarbons used as refrigerants – all these contribute to the greenhouse effect by withholding the warmth that earth receives from the sun. Without the greenhouse effect it would be impossible to live on the planet because it stabilises temperatures within a range optimal for organic life.

The problem is that man has upset the global thermostat and the ecosystem has lost its ability to absorb the excess carbon dioxide, resulting in the currently observed phenomenon of global warming. Published in September, the cyclical report of the Intergovernmental Panel on Climate Change (IPCC), which recapitulates the current state of knowledge on climate change, leaves no doubts here. Global temperatures have risen by 0.89 degrees Celsius since the beginning of the 20th Century.

That is why as early as in 1992, at the Earth Summit in Rio de Janeiro, the UN Framework Convention on Climate Change (UNFCCC) was signed, its main objective being to reduce greenhouse gas emissions. The Convention led to what then seemed a spectacular success in the signing of the Kyoto Protocol of 1997, which obliged the developed countries to cut their carbon dioxide emissions by a set rate relative to the 1990 levels, the rate for the EU being 8 per cent. The protocol entered in force in 2008, ended its life in 2012, and even those sympathetic to the idea admit that it has been a failure. Greenhouse gas emissions are growing – and so are global temperatures.

The reasons for this are easy to explain: the world has changed a lot during the two decades since the Rio summit. [[The Chinese economy has seen explosive growth but this has been at the cost of immense increases in energy consumption]], most of this energy derived from the combustion of coal, oil and gas, turning China into the world’s largest carbon dioxide emitter today. The catch is that – as a developing country – China was not party to the Kyoto Protocol, and nor were some of the world’s fastest developing countries such as India, Brazil, Indonesia or Vietnam. Not being obliged to reduce their emissions, they became favourable locations for the offshoring of industrial operations by the developed countries.

Britain, France and Germany were able to boast that their economies had become cleaner, forgetting that the dirty job was now being done for them by the developing countries, which were emitting more greenhouse gasses that Europe had been able to save. Today, few doubt that the only reasonable solution would be an agreement endorsed by all signatories of the United Nations Framework Convention on Climate Change (UNFCCC), a total of 194 countries. Such an agreement was to enter in force in 2013 after the Kyoto Protocol had expired.

The optimistic scenario was that a new era would be ushered in by the 2009 Climate Change Conference in Copenhagen (COP 15) where the green and ambitious EU will present itself as a global leader in fighting climate change, causing the rest of the world to follow. It was there that a new international accord was supposed to be endorsed, becoming legally binding in 2013. Meanwhile, however, in 2008, the financial crisis broke out, exposing the weaknesses of the western economies and weakening the international position of US and European leaders.

The Copenhagen summit was a fiasco so the Kyoto Protocol was extended until 2020 and today lives the life of a zombie, hardly inducing anyone to act.

But the Warsaw conference, officially the 19th yearly session of the Conference of the Parties (COP 19) to the 1992 UNFCCC, is to really start a new era in the fight against climate change. Gathered at the National Stadium, over 10,000 participants from all over the world have begun work on an agreement that is to be endorsed in 2015 in Paris. The event’s organization will have cost Poland some €25 million. Is it worth it?

[[What is also important is the question of whether the Climate Convention and the UN process make sense at all]]. The sluggish pace of the latter suggests that the ambitious targets – such as preventing global temperatures from rising more than 2 degrees Celsius above pre-industrial era levels – are unlikely to be met. Germany and Japan, both of which are switching off their nuclear power plants and replacing them with gas- and coal-fuelled ones, have suddenly become major brake pullers.

Prof Maciej Sadowski, a climatology expert with the Institute for Environment Protection, who as an official Polish negotiator has participated in numerous climate summits, including the Kyoto conference in 1997, says frankly: “The Convention’s real objective is not to protect the climate but to redistribute wealth between the rich and poor countries. It has been about power and money all along”.

There is no doubt that cost pressures can stimulate the development of new, energy-efficient technologies and more sustainable economic models. But such issues are hardly topical in countries such as Spain or Greece, where unemployment among young people exceeds 50 percent, or in France, where the far right is becoming more and more influential. There are thus many indications to believe that during the Warsaw summit the future will matter less than the present-day issues of the participating countries.

Who is afraid of CO2 cuts?

Three-quarters of the countries participating in the COP19 in Warsaw – the US, China, and Poland included – are opposed to significant cuts in carbon dioxide emissions, writes Wawrzyniec Smoczyński in a commentary for Polityka. The Western European countries, in turn, are demanding more CO2 reductions. However, writes Smoczyński —

It is easy for them to call for the adoption of increasingly ambitious targets because they are long past the coal era [...] have been switching to renewable technologies and are hoping to make big buck by exporting them. The problem is that few countries in the world can afford the kind of energy transition that has been under way in the developed part of Europe, and the EU emissions trading system, which was supposed to subsidize renewable energy sources, doesn’t work. At the same time, fears of a catastrophic climate breakdown have subsided and in crisis, governments are more interested in protecting their budgets and saving jobs than in saving the climate.