Report Demonstrations in Bulgaria
Protesters confront police as a bus tries to transport MPs away from Parliament in Sofia, July 23. 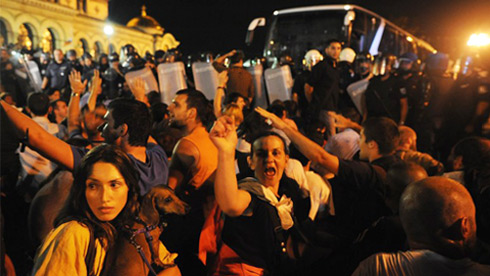 Power grasping in the dark

Two to three thousand people circled Bulgaria’s Parliament for several hours on July 23, trapping MPs and cabinet ministers, before a violent police crackdown. After 40 days of public demonstrations, the government appears increasingly out of touch with an evolving society.

Protesters confront police as a bus tries to transport MPs away from Parliament in Sofia, July 23.

The powers that be are collapsing. The barricades surrounding Parliament and the police cordon deployed around the building are reminiscent of the fall of communism and other periods of crisis in Bulgaria. The maniacal and paranoid communist regime, convinced someone wanted to take away its power through bloodshed and violence, was nonetheless expansionist: it tried to control and guide the masses, organising events for the workers in order to orchestrate the unity of the nation and the party.

Today, this same power rests in the hands of the “descendants of the Politburo”, but it has a whole new look. It is made of isolation, governance through fear, and guilty opacity. [[The symbol of power today is the barricade, of the “besieged facing the citizens”]], as one poster put it.

However, there have never been any barricades in front of the president’s residence. It is as if President [Rosen] Plevneliev [of the Citizens for a European Development of Bulgaria Party (GERB)] is unafraid of the demonstrators. There exists an anonymous power, rushing to take secret decisions and relieved to survive from day-to-day. It is this power that imposes, in a very opaque manner, its nominations for governors and high-level civil servants.

The government, the result of murky negotiations between two parties, pretends to lead some kind of political existence by trying to impose short- and long-term measures on the besieged parliament. These efforts are negated by the demonstrations and the political uncertainty that comes with them.

Beyond the state of the political scene and of popular unrest, the fact is that Bulgarian politics have not evolved beyond the grand ideas of the late 19th century – or, in the best case scenario, since before the fall of the Berlin Wall.

Looking closely, one sees that Prime Minister Plamen Orecharski [close to the Socialist Party, in power since May 29, 2013] conducts himself like a monarch, wanting to address the nation as a sovereign leader, convinced that society will accept in silence all manner of manipulations and actions. What neither the Socialist Party nor its allies can understand is that, with globalisation and the birth of the information society, the political scene has changed.

This is not the case only in Bulgaria, but in the entire world, even in Turkey and Egypt. Today, ministers and MPs are not so much figures of authority, but are rather mass consumer goods: society expects them to provide constant explanations, otherwise they are swept from the political scene.

This absurdity occurs while power faces a new type of test, that of online social media, where a new type of democratic transparency is developing. People around the world are no longer content to simply vote every four years and let someone else decide their fate between ballots. A new kind of citizenship is appearing. It has the power to sweep away the harmful relapses of any government.

Leaders of the past

It is a sign of a new forum, created through civic and network structures, which appear to know how to transform the traditional parties from the inside. This new type of democracy, rising from social networks, can destroy the status quo of patronage networks dear to the Socialist Party and its partners. It can destroy political feudalism, and all the practices linked to it, such as vote-buying. It is the creation of a new form of sovereignty that spreads towards the bottom through decentralisation and towards the top through European institutions and the financial markets.

The powers that be, deprived of their essence, have become empty shells, placed between the different centres of power. It is here that the besieged try to cast a spell, devoid of meaning. It is habit that pushes them to seek a solution through division, by opposing some citizens to others: Sofia and the provinces, or pro- and anti-government demonstrations.

The country's leaders still cannot understand that the new citizenry of social networks breaks the traditional ties between politics and theory, and that it is only a question of time before the different regions of the country reorganise according to a principle of democracy that goes beyond territorial mind-sets. Serguéi Stanichev, the leader of the Socialist Party, and Lutvi Mestan of the Movement for Rights and Freedom [party of the Turkish minority, in the government coalition] are desperately seeking an approach based on the spirit of democratic transition that is about to eliminate them. At the same time, they are clinging to power with all the means at their disposal, ready to make all the compromises required – even with the leader of the GERB's opposition, former Prime Minister Boïko Borissov. These are people who deeply believe that they are destined to lead.