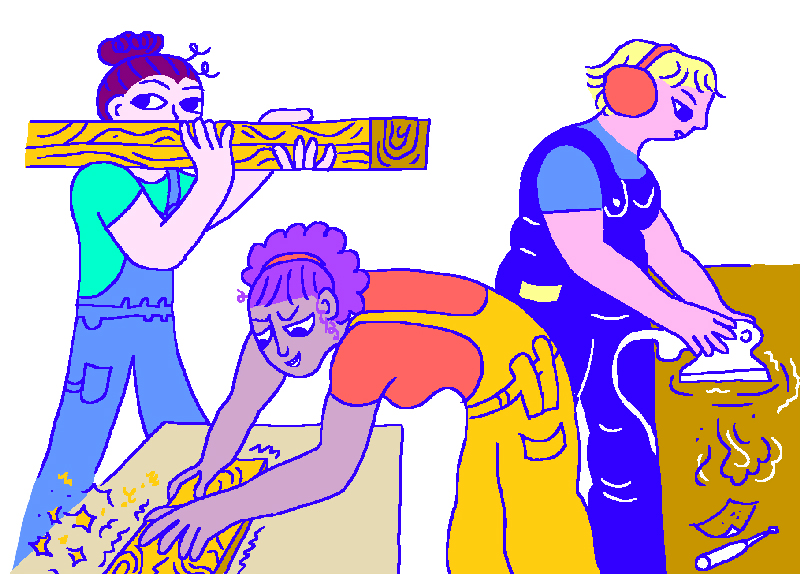 Professionals who don’t care about gender

Women and men do not work in the same professions: in France more than 90% of cleaning staff are women and the same proportion of construction workers are men. While women are managing to make their way into male-dominated fields, men are still rare in so-called "feminised" professions. This article won the European Young Reporter Award 2021.

“When you go into the staff room, the walls are lined with calendars with naked women”, says Alice*, a young French carpenter. "I felt I was entering a world where I didn't really belong. They didn't do it to intimidate me, those calendars were there before I arrived, but they won't take them down for me." Before becoming a carpenter, Alice was a civil engineer. She was already operating in a male-dominated world, with only 30% women on average. In her company, she is now the only female craftsperson.

At a time of gender-parity quotas in companies, gender segregation persists in the European workplace. There are still male- and female-dominated professions where more than 50% of the employees are of the same gender.

Being born with XX or XY chromosomes does not predestine anyone to become a nurse or a mechanic. However, women are over-represented in the sectors of education, social work and care, and personal service. Such personal qualities as attentiveness and concern for others are a necessity in what are known as the “care” professions. Often these are seen to be a "natural" extension of what women already do in the home and family.

On the other hand, the occupations carried out almost exclusively by men correspond to qualities associated with masculinity, or being "a real man" - especially physical strength and leadership. Such attributes are supposedly found among mechanics, construction workers and company directors.

The invisibilisation of women artisans

Despite their growing presence in the craft industry, women are still rare birds on the construction site, regardless of the country. They are still subject to gender stereotypes and sexism. Whether from teachers, colleagues, apprentices or customers, mansplaining is a daily occurrence. It regularly happens that a customer or a supplier refuses to talk to an experienced female artisan, preferring to deal with a young apprentice whom they consider more legitimate. Such situations are "a classic", says Fanny Colin, a self-employed carpenter.

More : Poverty and social exclusion are more likely if you are a woman

Women’s physical appearance can also be a pretext for devaluing and infantilizing them. The profession of master glassblower has long been a forbidding one to women. Jennifer Gaumer, who works in the profession, has been the object of remarks on several occasions. "I am small, so people want to do things for me, as if I were a child. Working with hot glass is all about movement, playing with gravity, endurance. But I can carry and fix a heavy stained-glass window made of glass and lead", she explains.

Nevertheless, the presence of women does not disorientate everyone. Jennifer's friend Salomée Ebibi trained partly in Denmark, where female glassblowers are an unremarkable sight. "Over there, some women are considered to be experts in the craft. Whereas in France or Italy, it i…