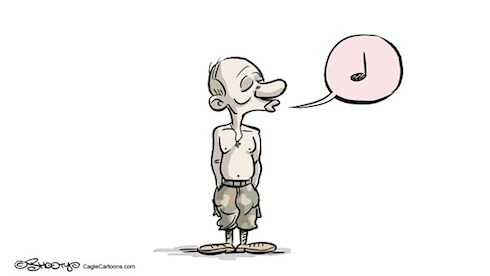 ‘Putin has destroyed a myth’

For the Bulgarian political scientist, Russia’s growing isolationism and aggressive posture contradict the theory that says economic interdependence prevents the outbreak of war.

The European Union is in the midst of a crisis of confidence, Russia is overly aggressive and the United States has its most isolationist president in decades. In this context, are countries like Romania and Bulgaria in danger of a [communist] restoration?

Ivan Krastev: The real threat is dysfunction. Most of the regimes [in countries such as Romania and Bulgaria] are based on their populations’ activities, not on the economy. They would not have the capacity to fulfil the expectations of people aspiring to a better life.

This is the difference between the regime of [Russian president] Vladimir Putin and the populist regimes of Eastern Europe. That of Putin is based on natural resources. Putin does not depend on his people. Only one fifth of Russia’s active population produces anything. This is not the case with Bulgaria, Hungary or Romania. These countries have to do more to encourage trade, to attract foreign investors.

We are not witnessing a restoration [of communism]. I believe that, as long as Germany and other countries remain politically stable, the European Union can work against this sort of populist leadership.

Are you afraid of Putin?

IK: We should all be afraid of Putin, but I do not think Putin has territorial ambitions. He has other problems. He depends on an economy that he cannot control, because it fluctuates with petrol prices. He fears fragmentation within Russia. He also believes Russian elites are too dependent on the West, which holds their bank accounts and educates their progeny. As a consequence, he decided to nationalise the elites, which has led him into confrontation with the West and to close the country. And with our help, he is succeeding.

Germany seems to have greatly changed its policy towards Russia.

IK: If Russia has lost something important in this crisis, it is Germany. Because of its political manipulations and lies, Russia has lost the German political elite and the sympathy of German public opinion. A German official told me that what horrified him the most was the fact that Putin lied to him in person. [In this context] a responsible foreign policy is impossible. I have been told that [German chancellor] Angela Merkel called Putin and told him, “We have photographs of your tanks 80 kilometres over the border in Ukraine. What do you have to say?” To which Putin replied, “I am surprised. But we are so corrupt that these tanks were probably sold by someone within our own ranks.” This sort of approach is unacceptable.

But the larger problem is that Putin has destroyed a myth: the one that says economic interdependence prevents war. We have witnessed that if one partner chooses to provoke, not only does interdependence fail to prevent war, but it also slows down any reaction. Regardless of the extent of the interdependence.

I was not prepared for Putin to declare that he did not want to live by the economy alone, but also enter into history. My greatest fear would be for Putin to convince other nations that economic independence is the sole solution. If that comes to be, the populist tendency will be reinforced.