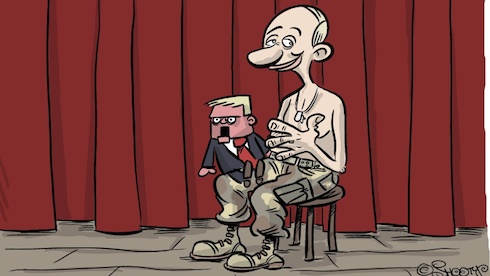 A quarter century after the end of the Soviet bloc, Central Europe’s leaders are growing closer to Moscow, both for their own interests and due to suspicion towards the United States and the European Union.

It is not solely in the Czech Republic that everyone was surprised when, during his welcoming address at the “Dialogue of Civilizations” forum [held in Greece in late September], President Miloš Zeman compared the war in Ukraine to an outbreak of the flu and called for sanctions on Russia to be immediately lifted. But the surprise was in no case justified. The president is surrounded by business leaders with Russian connections. As the war in Ukraine broke out, Zeman declared the government in Kiev was the sole responsible. He has spoken against sanctions a number of times.

During the Soviet era, a pipeline was built in Slovakia to transport Siberian petrol to Western Europe. At present, it could be reversed to transfer 30 billion square metres of oil from Europe to Ukraine per year, more than Russia plans to send to Ukraine in 2014. But when the Ukraine government asked Slovakia, several months ago, if it could use the pipeline, it received no reply. Bratislava eventually said the task was too difficult, citing obscure technical and legal problems. Following the intervention of the EU and the White House, Slovakia finally accepted putting a small pipeline to use, opening the way for no more than 1 per cent of the petrol Ukraine wishes to buy from Europe. The Slovaks tried to find a diplomatic solution that would not cross Gazprom and [Russian president Vladimir] Putin.

Like Zeman, Slovak prime minister Robert Fico has spoken against the EU sanctions. Wheras Poland, the Baltic States and Romania fear Russia, Fico sees greater danger in the growing NATO presence in Eastern Europe. In mid-September, after the NATO conference in Newport, he insisted he would never accept NATO bases in Slovakia, even if he had to pay the price of his political career.

Figures such as Fico, Zeman or [Hungarian prime minister Viktor] Orbán are very impressed by Putin’s success. To one side, they see an EU incapable of taking effective decisions. To the other, they see the Kremlin making difficult moves without hesitation. But there is something more. Putin is a professional recruitment officer who excelles in interpersonal relations. He knows how to build strong links, while the politicians of the large European nations, it has to be said, do not take the Slovak prime minister seriously. Putin’s warm messages flatter Fico – this is also how political scientist Ivan Krastev explains the seductive power of the Russian president.

In the shadow of the Kremlin

Ten years ago, when the EU was expanding to the East, a number of Western European officials feared former Soviet-bloc countries would demand a radically anti-Russian policy. But the situation today is completely different. Slovakia has chosen a practically pro-Putin path. The same is true for the Czech Republic. In Hungary, Orbán openly portrays Putin as an example to be followed. Among the countries of the Visegrád Group [composed of Czech Republic, Hungary, Poland and Slovakia], only Poland is favourable of an uncompromising policy toward Moscow.

In the Balkans, the situation is even worse. [[A large part of the Balkan population identifies with the Russians]]. Not only for historical reasons. The Bulgarians believe they have not benefited from turning toward Europe, that their country’s situation has worsened over the past 25 years. Furthermore, as Krastev affirms, they do not feel linked with the Ukrainians.

Slovenia and Croatia have nothing against Putin, and they are not pleased by the sanctions on Moscow. Serbia, which aspires to join the EU one day, openly identifies with Russia. The Romanians are alone in their aversion to Moscow. They are the exception in the Balkans, much like Poland in the Visegrád Group. This is unlikely to change in the near future, for several reasons. [German chancellor Angela] Merkel already has too many problems at home, where a majority is opposed to sanctions, to try and change the opinions of other countries. Furthermore, Central Europe was formerly very pro-American, while now no one trusts the United States. The pro-Putin trend is in a large part a secondary effect of the crisis in the EU and the fact that the US has withdrawn from Europe.