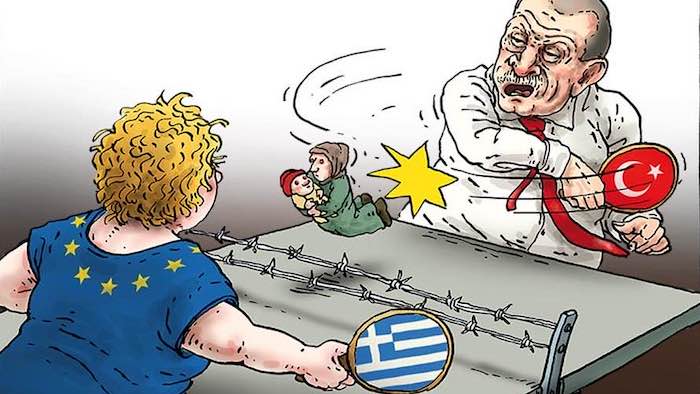 Refugees held hostage by Turkey, Greece and the EU

The human tragedy being played out on the Greek-Turkish border definitively buries one of the greatest achievements of international humanitarian law – and with the blessing of the European Union. The timing is good for the autocrat Erdoğan, whose blackmail over refugees is helping divert rumbling discontent in Turkish society.

Hundreds if not thousands of refugees are being held hostage by Turkey, Greece and the European Union in the no-man's-land on the Greek-Turkish border. Greek law enforcement agencies, supported by Frontex staff and local residents, are trying to push asylum seekers back across the River Evros.

They are using tear gas, beatings and various other humiliations, and occasionally live ammunition. There are reportedly serious injuries and one or two deaths among the migrants but the information is difficult to verify as the authorities on both sides of the border are preventing journalists from working. On the Turkish side, several journalists are being detained for broadcasting reports and pictures on this umpteenth human tragedy at the gates of Europe.

The tragedy’s first collateral victim is one of the great achievements of international humanitarian law. Following Greece's decision, with EU support, to suspend the acceptance of any application for asylum, the 1951 Geneva Convention is effectively dead and buried. From now on any country can point to the "legitimacy" created by this EU blessing in order to turn away asylum-seekers from its own borders.

As the Italian courts, following the approval of the senate, prosecute Matteo Salvini for "illegal sequestration of migrants at sea in 2019" when he was interior minister, the EU is turning a blind eye to the Greek government's abusive evocation of Article 78(3) of the Treaty on the Functioning of the EU, which deals with an urgent situation at external borders. However, as the UN High Commissioner for Refugees points out, the right to seek asylum and the principle of non-refoulement are internationally recognised and cannot be suspended.

Already in March 2016, the EU opened the door to a freeze on international humanitarian law by signing an iniquitous agreement with Turkey. Turkey pledged not to let migrants leave for Greece as it had done in 2015 and to accept the return of rejected asylum seekers in return for EU financial assistance (this would be paid out) and a few other promises (that remained a dead letter). But all this was built on quicksand. Turkey ratified the Geneva Convention in 1951 with a geographical clause limiting its application only to people fleeing "events in Europe".

As a result, the four million migrants currently in the country do not officially have refugee status. They are "guests" or at best asylum seekers with "temporary protection". This is why human rights organisations were all opposed to the 2016 EU-Turkey agreement, pointing out that Turkey is not a "safe third country" for non-European asylum seekers. But with few exceptions EU countries were petrified by the fear of the "flood of immigrants that will invade Europe", and so agreed to turn a blind eye.

The EU thus gave Recep Tayyip Erdoğan the opportunity to use blackmail by immigrants on a regular basis. And the Turkish president did just that in late February by announcing that the borders were now open to migrants to cross into Europe. Thus the Turkish autocrat, mired militarily in his Syrian adventure in Idlib, was using migrants as a non-lethal weapon. His aim was to put pressure on his Western partners and to destabilise Greece, with which he has also been involved in a dangerous dispute over the delimitation of maritime economic zones.

The Turkish president, by announcing the departure of hundreds of thousands of migrants to Europe – in reality the movement has not exceeded a few tens of thousands – is at the same time seeking to channel towards Europe the growing popular discontent in Turkey, particularly among AKP voters. It is amusing to see headlines on the front pages of Turkish pro-government newspapers in recent days about "the shameful and illegal decisions of Greeks and Europeans".

Turkey is a country where the rule of law has been suspended for many years and the prisons are overflowing with people whose only crime is to have denounced the numerous human rights violations, or to have revealed corruption cases, or simply to have publicly defied the autocrat. Autocrats do not only damage their own countries, they also spread their evil politics across borders.