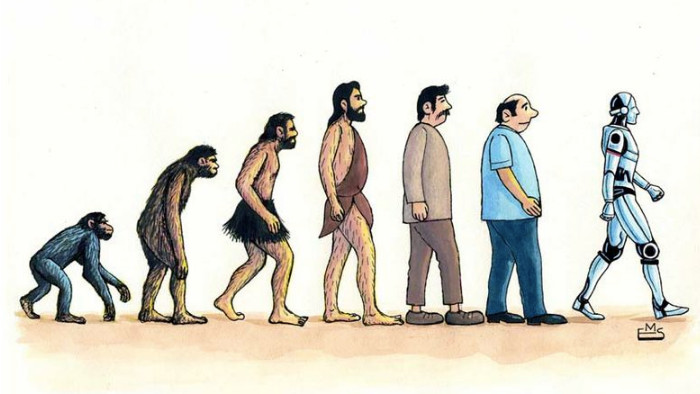 Concerns about the widespread displacement of workers by machines are not unfounded. Robots are more productive, do not get tired and can work round the clock. However, it is also worth noting that over the last century, technology has created more jobs than it has destroyed.

Let's start with some figures:

A tweet about a robot security guard that fell, under suspicious circumstances, into a fountain in the company’s lobby set off a Twitterstorm. Yes, it’s amusing, but such situations happen more than you might think.

Starship Technologies, a US courier company, recently complained that people keep kicking their robots as they are riding down the streets delivering parcels. According to research carried out by De Montfort University in Leicester, such tensions between people and robots exist because employers do not explain why they are using robots.

Concerns about the widespread displacement of workers by machines are not unfounded. Robots are more productive, do not get tired and can work round the clock. However, it is also worth noting that over the last century, technology has created more jobs than it has destroyed.

It is still difficult to say how many jobs will be created over the next few years. It is extremely difficult to give any kind of reliable prediction, because a lot depends on technologies that do not exist at present, or are still in the development phase. For example, 30 percent of the current jobs in the United States were created over the last 25 years. In fact, it is easier to determine which tasks will be affected by automation than it is to predict which jobs will be created in the coming years. 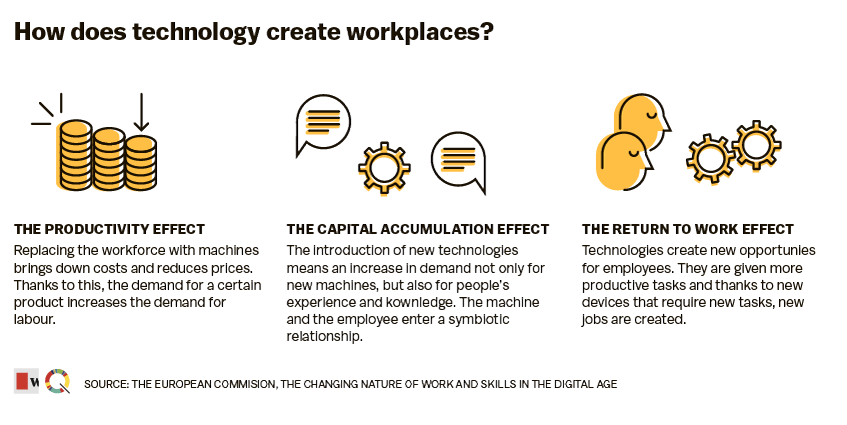 Robots will take over our tasks

Technologies not only create or destroy jobs, but also shape the way we perform them. Automation causes fundamental changes by adding new tasks or modifying existing ones. It also requires employees to be ready to learn.

According to Eurostat data, 21 percent of people working with computers or computerised equipment find that their tasks change after a software update or equipment upgrade. Given current trends in employment, the labour market will demand more and more from us over the next 10 years. Higher education, strong interpersonal skills, critical thinking, but also at least a basic knowledge of technology will be ever more crucial. While the demand for employees with lower qualifications (cleaners, cooks etc.) may increase, we will find that jobs requiring qualified manual tasks will become less desirable. 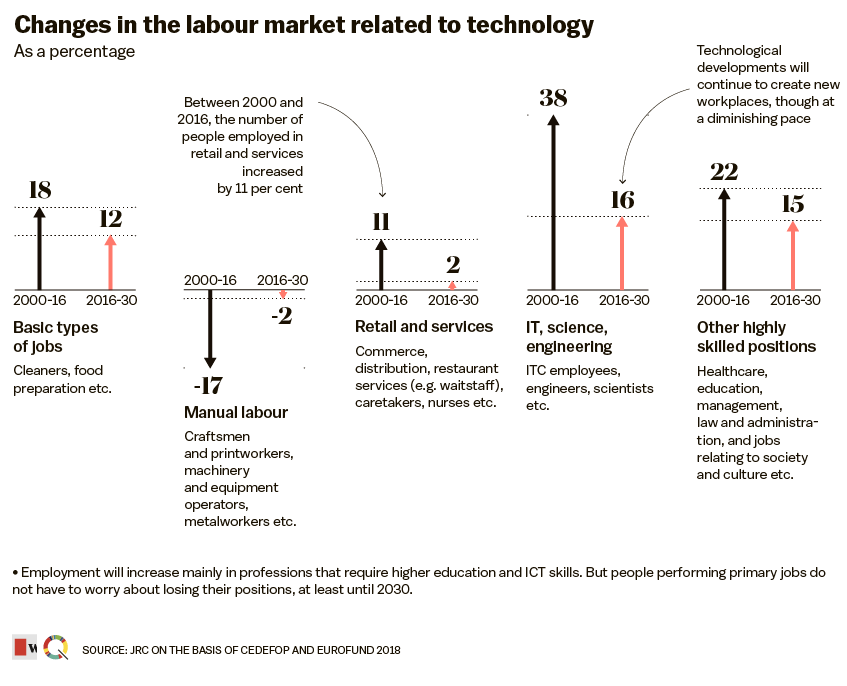 As many as one-third of the working population in the EU have little or no digital skills. These refer to the operation of electronic equipment, software and applications, as well as the ability to search, process and transmit information.

The Digital Economy and Society Indicator (DESI) shows a great contrast between certain countries. The share of economically active people with basic or above basic digital skills ranges from just 34 percent in Bulgaria, to 89 percent in Luxembourg.

Poland is one of the EU Member States with the highest percentage of people with no digital abilities at all. Only countries like Portugal, Romania and Croatia come out worse. Digital skills are particularly low among people with low education and without education, as well as among the unemployed. 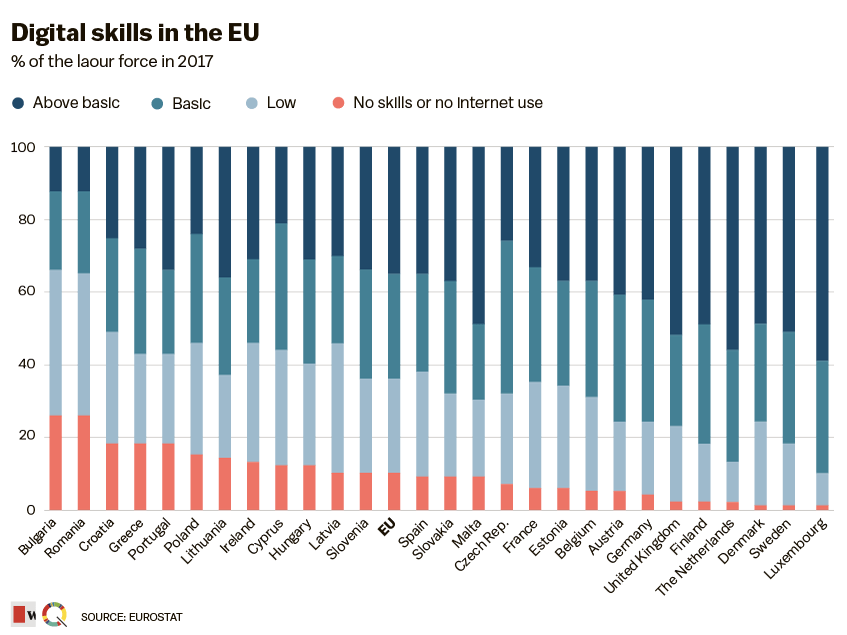 Digital illiteracy – even young people can be computer illiterate

Digital literacy is likely to become increasingly essential in the labour market year after year. Already in 2018, as many as 53 percent of companies in the EU reported difficulties filling vacancies involving the use of ICT tools (internet, smartphone, data processing applications, etc.)

“Often even 40-year-olds have computer problems. While, unlike some of the older generation, they do know how to turn on a computer, this is where their knowledge runs dry. It becomes a problem to write a short application in a word processor or to calculate a simple function in Excel,” explains Iwona Droździńska, a computer scientist who runs computer workshops.

The divide between people with digital skills and specialists who are essential on the labour market will grow. There will be a shortage of people able to use digital technologies in areas such as transport, energy, health and finance. Europe can expect to experience a shortage of skilled workers to meet the new digital trends.

A European Commission survey found that one in seven employers (15%) believe that not all of their staff are fully proficient in digital tasks. Given the growing importance of this in many different areas of life, it is becoming a problem. Already, around 90 percent of jobs now require some digital skills. 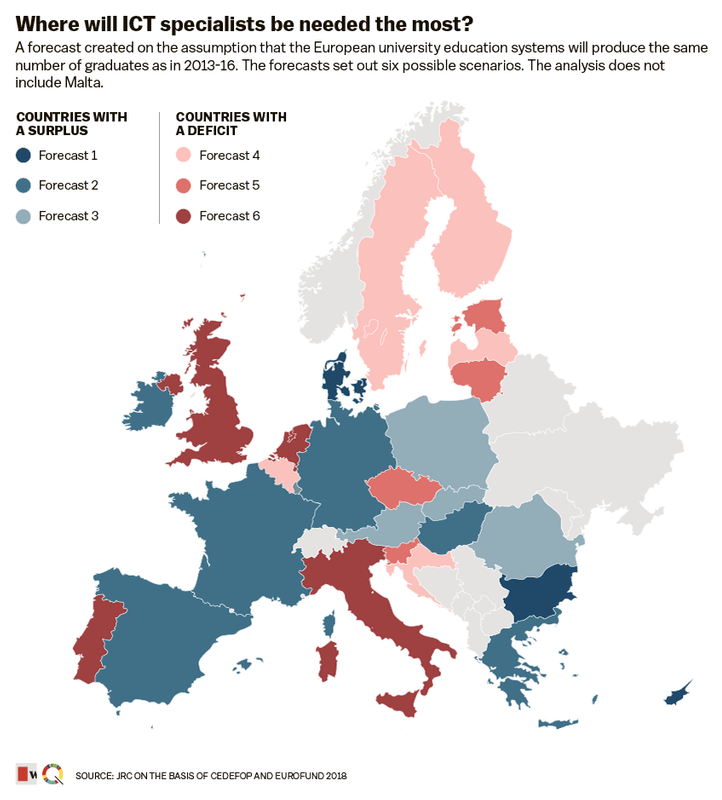 Larger companies invest most heavily in new technologies. This directly translates into a greater demand for employees with digital skills.

Despite the projected steady increase in the number of graduates with digital skills, as many as 14 EU Member States may be facing human resources shortages. One solution could be to increase the mobility of EU students and their willingness to move between countries.

However, even in countries where some surpluses are expected, the demand for graduates with digital skills will still grow, just at a slightly slower rate. However, if digitization accelerates across all sectors throughout the EU, even countries with graduate surpluses may start to encounter problems.

Will staff shortages be filled with robots?

Already now (or in the near future), manual workers in fast food restaurants and on assembly lines in factories could be replaced by robots. Just as basic data-processing professions, such as accountants who track payroll, could be easily automated using the available robots and software.

Data from the International Robotics Federation show that the pace of industrial automation is also accelerating in most developed countries. In 2016, an average of 74 industrial robots per 10,000 employees were installed worldwide. Just a year later, this figure had increased to 85 throughout the manufacturing sector. When considering robotisation at a continental level, Europe boasts the highest levels of robot density in the world – 106 units per 10,000 employees. In both Americas, the figure is 91 per 10,000, and in Asia it is 75.

When we look at individual countries, it is clear that South Korea has the highest growth rate in industrial automation. In 2017, Koreans had 710 industrial robots per 10,000 employees. This is mainly due to massive needs in the electronics sector. Germany – the highest ranked country in Europe – is famous for its automotive industry, where robots are used extensively. They have 322 robots per 10,000 employees. Denmark, with 230 robots and Italy with 190 robots come second and third in Europe.

Although automation is progressing and artificial intelligence in our workplaces will only increase, robots will never completely replace people. Experts stress that we will always need human workers with strong “soft skills” to introduce the human element into the workplace. Robots can teach us a lot, but never experience consciousness or empathy. 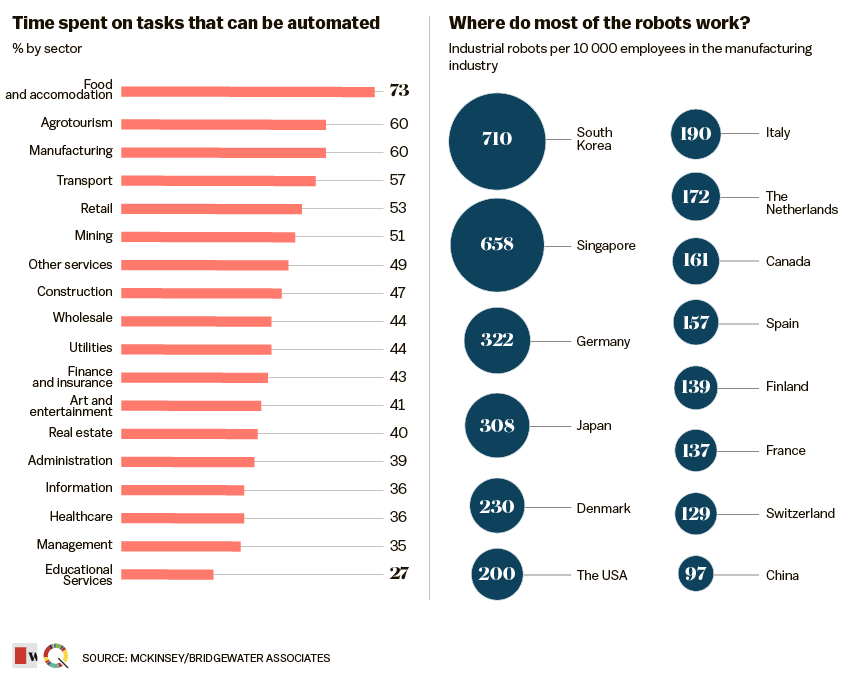