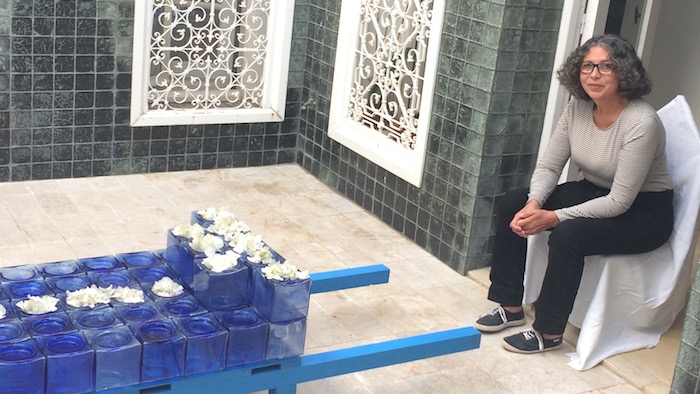 Sadika Keskes’ tribute to victims of the sea

Tunisian artist Sadika Keskes, with her latest performance on 1 October in Tunis, wanted to "restore dignity" to the thousands of migrants who died as they tried to cross the Mediterranean in search of a better life, and reminds Europe of its tradition of hospitality.

While Europe is struggling to find solutions to the migratory crisis, artists denounce these torn lives and try to restore dignity to the inert bodies that the sea rejects. Ai Weiwei followed the migrants on the paths of exile for two years and wants to erect a monument in their honour on the island of Lesbos. Others, like Ernest Pignon-Ernest, JR, Banksy, etc. have also faced the harsh reality of these departures for a better life through their artistic practices. The politically engaged Tunisian artist and glassmaker Sadika Keskes has created a performance called « Les tombeaux de la dignité » (dignity graves), in homage to the “no names”, the thousands of bodies of lifeless refugees found in sea, or on the beaches of the Mediterranean.

On 1 October, during a long procession-performance, the artist deposited seven glass tombs at sea, from the shores of Gammarth in the north of Tunis. Sadika Keskes is about to cross the Mediterranean by boat in a few days - depending on the agitation of the sea - to reiterate the action, on some beach of Lampedusa, the so called "paradise" of the migrants.

At 4 pm, Sadika Keskes have welcomed her guests in her huge property - half a factory, half a workshop, in the northern suburbs of Tunis. People were gathered around the patio where a poetic text was read by its author, Hannachi Hamma, a Tunisian journalist, facing Sadika herself, sat in front of her glass tombs. A secular procession then took place in silence, in the direction of the sea, on which the seven tombs were deposited. One of the glass burials, smaller than the others, paid tribute to Aylan, the little Kurdish boy found dead on a Turkish beach, whose photo had moved the Europeans in September 2015. This small white tomb among the blue ones symbolizes also the children who died in the sea , while their parents were trying to get them to the other side of Mediterranean to secure a future for them.

"I have designed my performance as a shout against indifference," says Sadika, adding: "No one thinks of collecting the DNA of the shipwrecked, so there is no process of mourning for families. The bodies are buried summarily, and often by the persons who discover them, sometimes with a member that exceeds. The idea is to restore their dignity to the disappeared, to awaken minds. And perhaps to take another look at the refugees, to concentrate our intelligences and creativity in order to solve these primordial problems. Because human being is at the center."

Surrounded by artists who came to help her and a few dozen people and the ambassador of France in Tunisia Olivier Poivre d'Arvor, Sadika Keskes, laid down the tombs on the waves and did not hesitate to accompany them offshore , fully invested in her performance. The silent, emotional crowd gathered in the name of the thousands of people who have disappeared at sea in recent years, driven by the hope of protecting their lives and having a decent future in Europe.

Each year, thousands of migrants are swallowed by the Mediterranean Sea during their journey, a few kilometers from the mainland. Fleeing the war, insecurity and poor living conditions of their countries, aboard makeshift boats, some 2,658 people have died from asphyxiation or drowning, according to figures given by the International Organization for Migration (IOM) on 4 October 2017. An approximate number in a context where the crossings are legion and the bodies, not all recovered.

For Sadika Keskes, "in recent years, the Mediterranean has experienced its worst slaughter. We cannot agree for an inert sea, with on one side a large cemetery, with one side nothing but pleasure boats and on the other, a mega highway of goods. Humans must cross themselves, as in the days of great civilizations. European policy is not up to its neighbors and its borders. Tunisia has welcomed a million and a half refugees after the Libyan revolution in 2012. We are a people of eleven million people. No Libyan suffered hungriness, the children were admitted to school without paying. I myself have sheltered five Libyan families. They were our neighbors, we could not but be united. Europe shows its difficulty of integration. It is time to find solutions for these people who leave desperately to welcome them with dignity when they arrive, but especially so that they can flourish in their country, without having to dream of a future elsewhere, that they could reach only with the peril of their lives.”

This artistic performance took place a few weeks after the Declaration of Tunis. On 24 July, a number of Maghreb and European countries met in Tunis with the European Commissioner for Migration, Internal Affairs and Citizenship, as well as the Minister of the Interior of Estonia, assuming the Presidency of the Council of the European Union, on the issue of the humanitarian crisis affecting the migratory route in the central Mediterranean.

A humanly worrying situation in that the difficulty of crossings is accentuated by the insecurity of criminal trafficking. The two main lines of action have been adopted: addressing the root causes of irregular migration and strengthening action and cooperation against trafficking and smuggling of migrants.

Very concerned by Europe and the Mediterranean, Sadika Keskes lived on the other side of the shore before settling again in Tunisia. In particular, she received a long training as a master glassmaker in Murano, famous fiefdom of the eponymous glass craft, on the Venetian lagoon. The artist regularly exhibits in Europe: in France, in Italy, in Greece, or in Switzerland. She naturally designed this performance in the heart of the Tunisian contemporary art event "po-po" (potential potential) in two stages, thus creating a symbolic bridge from one side of the Mediterranean Sea to the other. One way to make visible the invisible.

The Tunisian performance will be reiterated in a few days, on the coast of the Italian island of Lampedusa, one of the European hot spots, like Lesbos in Greece. The artist is about to embark on a crossing of the Mediterranean of about thirty hours by boat as soon as she can, equipped with her glass tombs.

“The reception of migrants is not everywhere the same,” says Sadika Keskes: "Lampedusa has become the symbol of immigration from northern Africa and in the migratory crisis. There, the reception was exemplary. Giusi Nicolini, the former mayor of Lampedusa, recently replaced, made exceptional efforts to welcome. Through my performance I greet these kinds of actions, but I also sound the alert to the migrants to tell them that when crossing the sea, they risk going to death. The Mediterranean is a cemetery. And the process is accelerating.”

The glass tombs of Sadika still float on the waters of Raoued at Gammarth, waiting for their departure towards Italy. Passers-by and tourists can see and wonder. "Thus the public can identify and question what happens," says the artist.

Italy has not stopped calling upon the European Union, particularly since the migratory pact with Turkey, which has resulted in the closure of the Balkan route. These agreements have made Italy, which receives several thousand migrants every month, the main gateway to migrants in Europe. The latter struggle to find viable solutions to the migratory crisis. According to Sadika Keskes, "Europe demonstrates that it does not have a real capacity for integration. The fact that Europe looks at immigration only from the negative point of view, while it is also a source of wealth, seems problematic to me. Immigration brings a different culture, and from differences result cross-fertilisation and enrichment. It also creates an undeniable economic dynamic. Let us not forget that the empires were built on crossings of civilisations."

Photos: The symbolic funeral and burial at the sea ceremony performance led by Sadika Keskes on 1 October in Tunis. Photos by Alexandra Boucherifi