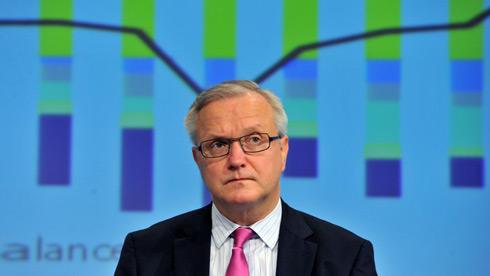 So what’s the plan, Mr Rehn?

Discipline and budget cuts: The cure prescribed for the Eurozone no longer has unanimous support. Unfortunately, voters can not settle this debate as it is between unelected officials, foremost among them, is the European Commissioner for Economic and Monetary Affairs.

Perplexity. That’s what’s conveyed by the clash over austerity going on between the European Commission and the International Monetary Fund (IMF).

The debate is as extremely technical as it is profoundly political. In essence, it’s about how much national GDP falls with every point of tax cut. While it may seem rather complex, it’s actually rather simple: depending on the extent of the so-termed “fiscal multiplier”, tax cuts can pump an economy back to life – or deflate it.

National and international blogs where economists debate these matters are abuzz with analyses and counter-analyses that attack and defend the austerity policies pursued by the EU. The problem is not just that the discussion about the fiscal multipliers has reached levels of complexity that delight only academics. The issue is that, although the formulas and the calculations of these economists have an impeccable appearance on paper, backed up by the appropriate graphics, tables, case studies and statistical formulas, a peek behind the curtains of the workshop reveals a highly virulent debate that often swirls with crude accusations of incompetence, manipulation of data, and ideological bias.

What can we learn from this discussion? In the best case scenario – that is, assuming that all the experts are acting in good faith – and taking into account the limitations of economic science, which is not a natural science, unlike physics or chemistry – we can conclude that there is support beyond a reasonable doubt regrding whether the policy being imposed by Brussels (the Commission, Eurogroup and ECB) is appropriate. If what we know with 100 per cent certainty is that we don’t know enough about it, then no one can be 100 per cent certain of what to do. That is not much, but it is enough to begin a public debate about a formula that begins looks more like a dogma or divine revelation, than a public policy.

To the confusion and suspicion we must add the perplexity produced by the observation that two of the institutions that constitute the so-called troika, the Commission and the IMF, allow themselves time and again to disagree publicly over the austerity policies. The idea behind creating these organisations and heading them up with officials who are not democratically elected is that their extensive technical knowledge on how to grow an economy and create employment gives them the right to govern without popular consent and without fear of being turned out of office at regular elections. Yet accepting the principle that there are policies that cannot be submitted to a vote is one giant step back in our democracy: democracy, if it’s anything at all, is to be able to throw out bad leaders that push bad policies. If we do it at all – put up with unelected leaders – it is because we gain in efficiency as a trade-off for losing legitimacy and democratic representation.

Remember the “Everything for the people, but without the people” of enlightened despotism? What we have here, where we have got to in the current European situation, is that we have been left saddled with the despotism but not the enlightenment. That is, with a technically incompetent despotism that we cannot defy, neither with brainy economic analyses nor with electoral or parliamentary oversight. The chief proponent of all this is Commissioner Rehn, the Finn behind the recommendations (many of them binding) that his office has just readied for Spain, among which stand out the recommendation to raise VAT even higher and make firing even cheaper.

Rehn is not exactly a technician. He’s an active politician (Deputy and Vice-President of the Finnish Centre Party between 1988 and 1994, then MEP aligned with the Liberal-Democratic Party, ALDE, between 1995 and 1998) and he holds a PhD in political science from Oxford University.

That’s all very laudable, but he has no more statistical or empirical certainty on fiscal multipliers than you or I. Nonetheless, the future of a country (Spain) in which unemployment has breached the 6m mark and threatens to hit 27 per cent, is in his hands.

To get the choice of economic policy wrong is a luxury we cannot afford. If we do, will we explain to the next generation that we went along with it against our will, or that we lacked the courage to ask the right questions?