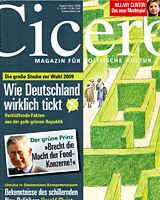 Just as Cicero sought to save the Roman Republic, this cultural magazine pins its hopes on the power of ideas. Founded in 2004, Cicero wants to be a German version of the New Yorker and solicits contributions from political and cultural luminaries.

Published by the Swiss Ringier Group, this monthly was also the defendant in a cause célèbre adjudicated by the German Constitutional Court, which declared a federal police raid on Cicero’s editorial offices unconstitutional. The ruling was hailed as a milestone vindication of freedom of the press in Germany.

The magazine’s website offers a wide range of content, albeit without the articles in full from the paper edition.