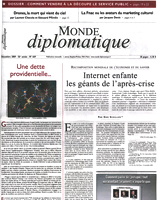 Founded in 1954 as a supplement to the daily Le Monde, Le Monde diplomatique is a monthly magazine that runs mostly in-depth political analysis and opinion pieces on international affairs. Editorially independent from the Le Monde Group, the "Diplo" also jealously guards its independence from advertisers by limiting its ad revenue to 5%. Most of its articles are by freelance journalists, “public intellectuals” and academics. Hitherto of a decidedly alter-globalist slant, the monthly is critical of all forms of imperialism, particularly the American brand. In February 2009, Le Monde diplomatique was published in 26 different languages (including English), with 72 international editions, 46 of which were printed (total circulation 2.4 million) and 26 electronic, covering the bulk of Europe, South America and the Arab world, including a Palestinian edition.