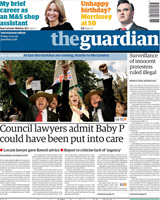 Founded in 1821, The Guardian can no longer be described as just a newspaper. Under Guardian news and media, one of the UK’s most successful media companies, its flagship guardian.co.uk has become one of the world’s most visted news websites. In addition to the contents of the print edition, there are specialised sections on the arts, sports, travel, the media, as well as multimedia content (documentaries, podcasts) produced by staffers, offering what must be one of the most complete English-language news services.

Owned by the Scott Trust, the Guardian is generally considered to be the centre-left title of reference. Though close to New Labour, its tradition of editorial independence means that it is often highly critical of the government. Its line-up of illustrious commentators includes the likes of George Monbiot, Geoffrey Wheatcroft and Polly Toynbee.