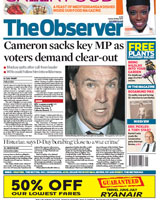 The world’s oldest Sunday newspaper (est. 1791) also happens to be one of the best the British quality press has to offer. It was acquired by The Guardian in 1993 with the two titles broadly sharing the same political orientation, despite their differing stance on the second Gulf War in 2003 when it came out in favour of British involvement.

This Berliner-size weekly is renowned for its long, serious, in-depth reports. In addition to the 6 section paper, and weekly magazine the Observer produces a portfolio of lifestyle titles including Music Monthly, Sport Monthly, Food Monthly and Observer Woman.

The online editions of The Guardian and The Observer are accessible on a shared site, which may well be the most complete on-line news service in the British press. In addition to the contents of the two papers, it features a number of specialised sections. This highly useful site includes the published articles on breaking news and topical issues as well as multimedia content.