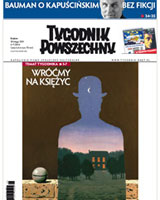 A Catholic journal of society and culture, the “Universal Weekly” was founded in 1945 and has published giants of Polish culture like Czesław Miłosz, Zbigniew Herbert and Leszek Kołakowski. The only magazine other than Italy’s Il Tempo to have interviewed Pope John Paul II, Tygodnik Powszechny was considered during the 1980s the unofficial media outlet for the democratic opposition.

It subscribes to an open, ecumenical current in Polish Catholicism, attempting to merge the principles of faith with liberal values, which often leads to conflict with the traditional wing of the clergy. Since June 2008, the majority stakeholder in the magazine is the ITI media group. Tygodnik Powszechny has been experiencing financial strain recently, causing its editor-in-chief, Adam Boniecki, to turn to readers for help.