Interview Freedom of the press 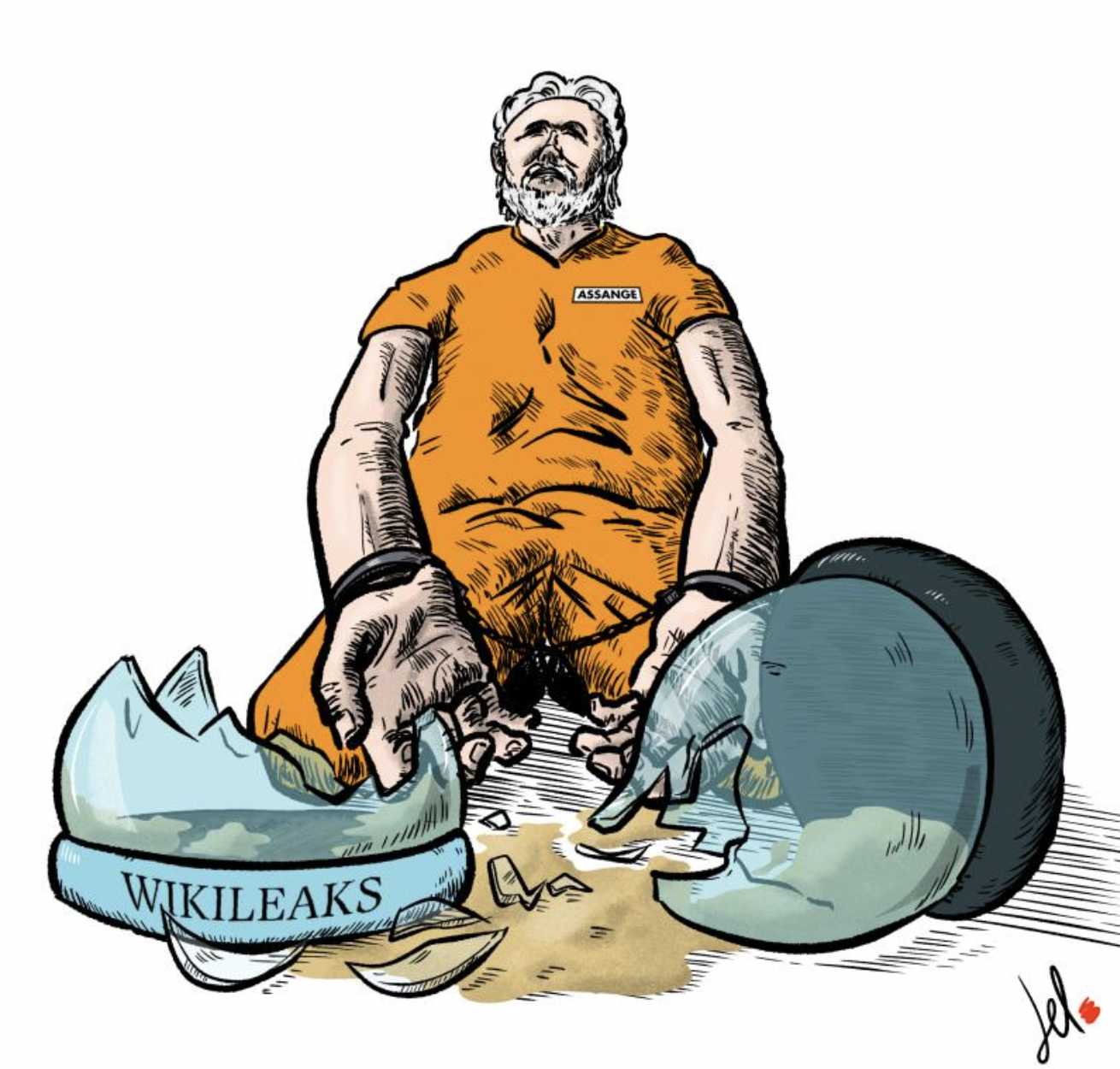 Interview Freedom of the press

Stella Morris: ‘Julian Assange’s case has set a new global standard in freedom of the press’

In the wake of a British court’s decision to reject WikiLeaks’ co-founder appeal against his extradition to the United States, where he faces an up to 175 years sentence, we met his former lawyer Stella Morris – whom Assange married in prison a month earlier – at a rally in support of Julian Assange’s liberation in Brussels.

The rally took place in place de la Monnaie, in central Brussels, on 23 April, and was organised by Free Assange Wave, with the support of Don't Extradite Assange (DEA), Reporters Without Borders and Amnesty International. Several public figures, like former Labour party leader Jeremy Corbyn, former Iceland Interior minister Ögmundur Jónasson, Ernest Sagaga from the International federation of journalists, or lawyer Deepa Driver spoke in support of Julian Assange’s liberation and against his extradition to the US in the name of freedom of expression and of the rule of law.

Voxeurop: We’re in the final phase of Julian Assange’s extradition procedure. What are the next steps?

Stella Morris: There are still some appeals in the UK process available to us, once the Home Secretary Priti Patel approves the extradition – if she does so. Then we can appeal to the High Court, and potentially to the Supreme Court. But ultimately, the most likely scenario is that it ends up before the European Court of Human Rights (ECHR), which can issue a binding decision that will block the extradition. This is why it is so important for the European Continent to understand what is at stake: Once it reaches the ECHR, the case will create jurisprudence that will affect the scope of press freedom for journalists within the European space.

The importance of this case could not be greater: It’s wrong to think that it only affects Julian Assange, or Wikileaks, or the US. The US prosecution has effectively criminalised journalistic activity. There is a political persecution against Julian, and in this process, a new standard has been set by which journalists everywhere are at risk, not just because they might risk being extradited to the United States, but also because it has created a new global standard.

The US has long been a defender of free speech, but it is now furthering the most dangerous attack on free speech, both legal and political, through this case that reaches beyond its borders and into foreign jurisdictions. Foreign countries will take advantage of this and apply the same principles. So if you can go after journalists anywhere, you just need a cooperative government, and there are plenty of countries who persecute dissidents and want to persecute journalists, and have cooperative allies within the European space. It’s a terrible case for press freedom and for what it means in Europe.

It also sends the signal that not only will there never be justice for the victims of crimes committed by states, and anyone who acts with a conscience in exposing those war crimes will be hounded and punished by the perpetrator of those war crimes. It is a complete inversion of everything that democratic countries say they stand for.

What is the timeline for the next hearings and judiciary steps?

It’s really the endgame now. It’s a matter of months, not years. Julian’s fate will be decided in the next few months. It’s really as if Julian is to win this case, it will be in the European Court of Human Rights. It’s a political case, and that means that the public’s understanding and the understanding by the educated political classes of what this case means is critical, and it’s partly why I will be traveling to the European continent  more often, to remind people that Julian has spent over three years in a prison for doing his job as a publisher, and that an extradition will be tantamount to a death sentence. But it’s not just Julian’s fate: It’s the fate of the future of democracy in Europe especially.

Did you find support within the public opinion and the political class in Europe?

Yes, in the national Parliaments in France, Germany, the UK and so on, there are several political groups who show active support, and there the support is across the political parties. Where there is lack of support, is down to ignorance, because the subject experts on this issue, like Amnesty International and the freedom of the press organisations are all very clear that this case is an abomination, and the politicians would have a hard time justifying being against the basic principles that this case violates.

Do you feel that the support of the public opinion is as strong as it was before Julian Assange was confined within the Ecuadorian embassy, then detained in Belmarsh prison?

The UK has hidden Julian from the public view, he hasn’t been to court, he has not been allowed to attend in person in court to court since January 2021 – he was allowed to attend through video link. The reality is that no-one, including the press, was able to photograph him or interview him. This is typical of a political case where there is a surface appearance of process, but the abuses come in the detail, such as the refusal to allow him to come to court, and even when he was in court, he was not allowed to sit with his lawyers. We even had a fight with UK authorities about allowing a wedding photographer, for this same reason. They are afraid to show that Julian is a human being. But the persecution of Julian is now plain for everyone to see.

Once the charges were finally unveiled everyone was in shock. The US administration is imprisoning him for his journalistic activities, and this means the precedent will be set for others engaging in such activities. He has been in prison for over three years, without conviction, solely on the basis of this outrageous extradition request. The UN Special Rapporteur on Torture Nils Melzer investigated Julian's case and wrote a book about it. He concluded he had been subjected to psychological torture, and the states involved have engaged in a concerted effort to deny him his most basic rights. Whistleblowers have revealed that they were working for the CIA in the embassy, bugging legally privileged meetings.

It’s a terrible case for press freedom and for what it means in Europe. It is a complete inversion of everything that democratic countries say they stand for

Recent reports revealed that Mike Pompeo's CIA was actively plotting to assassinate Julian during the Trump presidency. During this time the CIA also rolled out a wide-ranging disinformation campaign to reduce political support for Julian and WikiLeaks in preparation for Julian's arrest, so there is a lot of confusion about the case. Investigations like that of UN Special Rapporteur on Torture Nils Melzer, or Stefania Maurizi, or the RAI investigation that was produced last year, are making a major impact. The public's understanding of what has happened here is increasingly informed. This awareness needs to keep growing because if it is strong enough it will stop this extradition and free Julian.

Are you optimistic with regards to the next phases? If yes why and if no, why? What do you expect or would ask to the people in Europe at this stage?

I have to be hopeful that this travesty will be brought to an end. This case tests the fairness, robustness and the independence of every institution it has entered into contact with. The United Kingdom has failed time and time again. The High Court overturned an earlier decision to block the extradition after the US government made a political intervention in the form of a letter to the UK government, which the British court shockingly accepted as a reason to allow the extradition after all. This extradition is totalitarian to the core. It is anathema to European values. The only fair and obvious outcome is for this extradition to be blocked.

Categories
Internet and innovationThe media and freedom of information