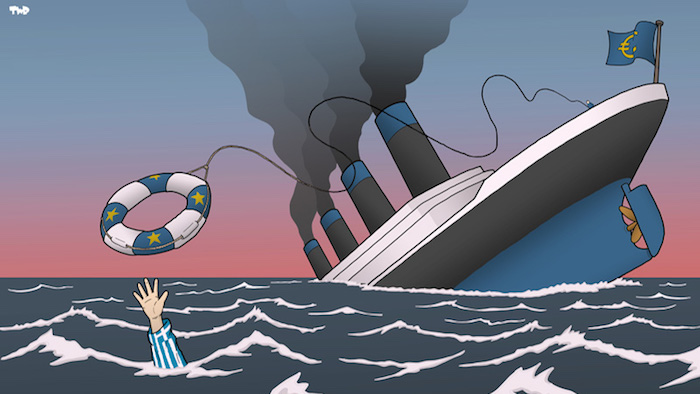 On August 20th, Greece stepped out from under the supervision of the Troika, whose intervention will go down in history as a model of what not to do when you really want to help a nation recover, as data show.

On August 20th, Greece stepped out from under the supervision of the Troika formed by the European Commission, the European Central Bank and the International Monetary Fund. Greece was of course a dysfunctional state with an undeniable need for profound reforms, but after policies imposed by the Troika since 2010, virtually all the country’s economic and social indicators have greatly deteriorated – including its public debt, which these policies were supposed to keep under control. The Troika’s intervention will go down in history as a model of what not to do when you really want to help a nation recover.

Greece’s decline isn’t only to be seen in the financial and economic statistics. Demographic indicators also make for stark viewing. The sign of a sickness that is far from short-term. Since 2008, Greece has lost more than a million inhabitants, while the eurozone gained more than 8 million.

Furthermore, it is above all the young who have left the country, and primarily the most qualified among them. Out of 10 million inhabitants, Greece counts almost 500,000 less young people aged between 20 and 30 than in 2008, leading to doubts as to whether the country can really recover in the future, with such a lack of young qualified labour.

On the other hand, the older generations have evidently remained, aggravating the the burden on social support systems.

Under the effects of the crisis, unemployment exploded, reaching a peak of 28% in 2013. Since then it has fallen slowly, but it will remain over 20% this year, according to the European Commission. A significant cause of this fall in unemployment is the exodus of young people, rather than improvements in the employment situation.

Under austerity, Greek domestic demand went down by more than 30% in volume and has barely recovered over recent years. It’s a decline of comparable amplitude to that which recently hit Venezuela.

Public spending has fallen too, by more than a quarter in volume, and is barely recovering, leading to a brutal impact on infrastructure, enormous problems in health and education systems, and massive impoverishment of (many) pensioners remaining in the country due to a lack of alternatives. It is not too clear how all these supplementary difficulties could lead anyone to imagine any future recovery of the country’s economy...

The worst is that this crushing austerity, and in particular the drastic reduction in public spending, has clearly not helped to control the country’s public debt, despite the partial cancellation of debt which began in 2012: since then, the public debt has risen again to 20 points of GDP and has virtually remained there over recent years.

When you keep a country in deflation and recession, it cannot in any way pull itself out of debt. Nobody seriously believes that the Greek government will manage to reimburse its current debt. It’s just a matter of postponement.

Real wages for Greeks have fallen by more than 15% on average, and for the moment continue to fall.

Austerity policies, calibrated in a particularly unjust manner by the Troika, have caused a significant rise in inequalities (though already very high) between 2010 and 2012. Since Syriza’s arrival to power in 2015, those inequalities have fallen back a little, thanks to fiscal justice measures imposed by the Greek government on the Troika.