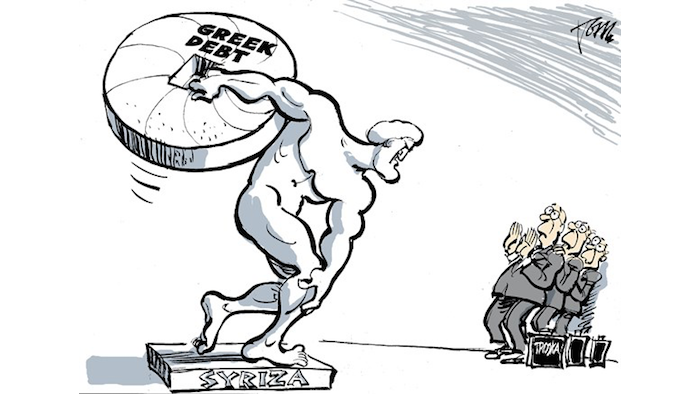 ‘The best that could happen to Greece’

Eurozone member states created the Troika to maintain control over emergency payments to Greece in 2010 and to ensure that the country would cut its spending and reform its economy, writes Michael Martens in the Frankfurter Allgemeine Zeitung.

Consisting of representatives of the International Monetary Found (IMF), the European Central Bank (ECB) and the European Commission, the Troika “was supposed to become an auxiliary government and audit court with permanent rights of intervention”. But, Martens writes, the name “Troika” and possibly even the composition of the control group will be changed. Even European Commission President Jean-Claude Juncker is said to be in favor, as the EU did not like the IMF’s involvement in its affairs, and the ECB “was never convinced of its own role” in the Troika.

The Troika itself consists of “experts from Harvard or the London School of Economics” who would “travel to Athens, check in at the Grand Bretagne or Hilton [hotels], open their expert laptops and enter numbers in Excel spreadsheets to calculate how Greece is doing. In other words: The troika is the best that could happen to Greece.”

One striking thing though, is that “nearly no one knows what the Troika really does” —

The three leading negotiators of the Troika are nearly unknown to the public. Poul Thomsen from Denmark, as well as the Germans Klaus Masuch and Matthias Mors, have been some of the most important actors of the euro crisis, but nearly no one knows their names.

The Troika brought about “the worst experiences in Greece,” whose government often changed laws at the last minute to mitigate their impact. All the same, Martens writes, —

Internally, the Troika refutes the claim that their demands had worsened the social crisis. It was more the Greek government that shifted the burden from privileged protégées to normal citizens.