Report The fight against the cartels 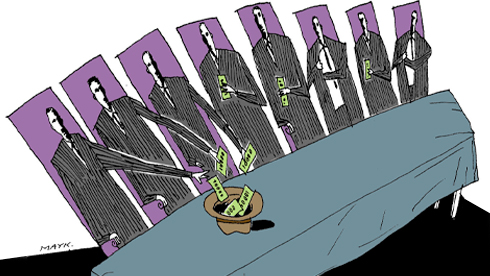 Report The fight against the cartels

At the end of June, the European Commission accused 13 banks of running an illegal cartel on the derivatives market. It is having more success uncovering such scams, often thanks to whistleblowing by those involved, according to a special investigation by Les Echos.

At times, the life of a businessman can resemble a spy movie – one of those films where the hero pulls out a camera concealed in a matchbox to snap photographs of secret plans, raising his head now and then to keep an eye out for the sinister KGB agent lurking in the shadows.

The executive of the Degussa Group of chemical companies must have had such scenes in mind on the day in April 2002 when he found himself in a beautiful old office building in Zurich, camera by hand, trying desperately to collect evidence that would let his company wriggle out from under the wrath of the European Commission.

Before him on the table lay documents summing up 30 years of secret collusion by several chemical firms – his employer, Degussa, its affiliate Peroxid-Chemie, AkzoNobel and Atofina – to carve up a highly specific market, the market for organic peroxides. From 1971 onwards, these groups had been meeting in secret to divvy up customer share and fix the prices.

The conspiracy held together for almost three decades – right up to the moment it was betrayed. That was in April 2000, when AkzoNobel executives decided to denounce to the European Commission the racketeering they were into up to the elbows. A fit of sudden remorse? Not really: the group only wanted to take advantage of what is called the clemency procedure, under which the first member of a cartel to denounce it will see the hefty fine that it should otherwise pay written off. Even the other participants have an interest in quickly singing along: the second to confess may see its fine reduced by 30 to 50 percent, the third by 20-30 percent, and so on. It’s the protection of the penitent borrowed from the fight against the mafia and adapted to business circles.

After the confession of Akzo, panic broke out in the cartel, and Atofina very quickly came calling. A few months later Degussa expressed its desire to work with the Commission. Its directors, though, got a cool reception from the officials of the European executive: “It’s very good that you have come to see us, but to qualify for a discount on your penalty we’re going to have to see some evidence that we don't have yet.”

How to do that? All the documents proving the agreement were in Zurich, locked away in the safe of Treuhand, the Swiss company that coordinates the cartel. There was only one thing to be done: one of the Degussa directors hopped on a plane to Zurich, on the pretext of some request or other of Treuhand, in order to photograph the incriminating documents on the sly. A few days later, officials of the Commission had all the pictures on their desks, including the document that immortalised the founding agreement – a pink paper from 1971 setting out the structure of the cartel. A masterstroke, which allowed Brussels to wrap up its investigation. The sanctions were imposed in 2003. The €34m fine that Degussa would have had to pay was reduced by 25 per cent.

Officials from the all-powerful "DG Comp" – the European competition authority, or Directorate General for Competition – could recount dozens of lurid stories like this. For the last 10 years, there has been a brisk trade in denunciations of secret agreements, about 80 per cent of which are punished at the European level thanks to a “snitch”. “This programme is really what has allowed us to knock the system off the rails. All the companies caught up in a cartel will have to ask themselves sooner or later if it isn’t better to turn in their bedfellows before being turned in themselves”, Olivier Guersent explains.

The current head of the office of Michel Barnier, the Internal Market Commissioner, knows the story by heart, since he created this procedure, then profoundly overhauled the investigative methods of the Commission. At the start, the idea – modelled on what had been done a few years earlier in the United States – was far from being greeted with unanimity in the corridors of Brussels. Several officials expressed their distaste at this Mani Pulite [the 1990s Italian investigation into political corruption] approach that placed the cartels at the same level as violent crimes.