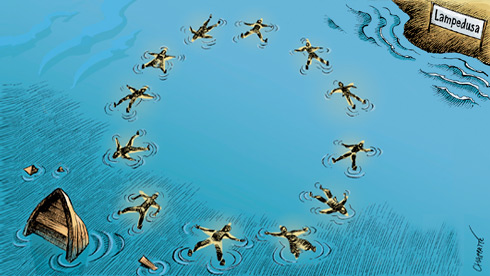 The calls for stricter border controls, which are echoing throughout Europe, will increase rather than decrease the risk of tragedies such as the Lampedusa disaster, argues an immigration expert. That is why the EU should first reform its asylum policy.

The boat disaster on October 3 off the coast of Lampedusa, which cost the lives of around 200 refugees and migrants, is already prompting governments and international organisations to loudly call for “tough action against human trafficking”. Over the past decade, that has been the standard reaction whenever such a tragedy has occurred off the southern coast of Europe. That kind of logic turns the causality of the events upside down. After all, it is the very tightening-up of border controls that forces migrants to take dangerous routes and makes them increasingly dependent on human traffickers to get across the border.

Migration is primarily fuelled by the continuing demand for cheap labour in agriculture, the service sector and other informal sectors. A considerable minority of these migrants are refugees fleeing violent conflicts in their homelands. Until more legal immigration channels are developed and as long as refugees are denied access to asylum procedures, the majority of this migration will most probably continue illegally.

[[It is an almost impossible task to close off the extensive coastlines of the Mediterranean Sea]]. Border controls have largely overreached their objectives. In the 1990s, controls in the Strait of Gibraltar were tightened up, but that failed to stop the migration. Instead, in the course of the first decade of the 21st Century, the African migration routes diverted eastward and southward over land.

The result was an unintended expansion of the area EU countries have to control in their “fight” against illegal migration. That area now includes the entire North-African coast and various places along the West-African coast, from where refugees set course for the Canary Islands.

The routes have become longer and more dangerous, forcing migrants to rely more heavily on human traffickers. For two decades, a fortune was invested in border controls and ever-more money pumped into Frontex (the European agency for the management of operational cooperation at the external borders), but that too, was unable to halt the migration. Since 1988, at least 19,000 people have died - and that figure is based only on the bodies that have been found. Especially concerning is that the so-called “fight against illegal migration” has led to people fleeing violent conflicts and persecution in countries such as Syria, Somalia and Eritrea actually being denied access to asylum procedures.

The “fight against illegal migration” in the Mediterranean shows many similarities with the situation along the US-Mexico border. Many studies by American researchers have shown that tightening up the highly expensive border controls and building walls between the US and Mexico has not stopped the migration, but that the migration flows have shifted to longer, more dangerous routes through the desert, that migrants have become more dependent on the traffickers and that the death toll has risen. Another unintended effect of the border controls and restrictive immigration is that people are too frightened to try and return to their home countries for fear that should they need to flee again, they may not survive the journey back into Europe. This puts the brakes on migrants moving freely in and out of the EU.

The real scandal, however, is that governments and migration agencies such as Frontex shamelessly abuse tragedies such as the disaster off the coast of Lampedusa to invest even more money in “the fight against illegal migration”. Consequentially, in Europe, too, dependence on human trafficking will only grow, refugees will be denied access to protection and the death toll at the borders will rise even further. A policy aimed at “engaging in battle with illegal migration” is therefore doomed to failure, as it is the cause of the phenomenon that it alleges to “fight”.

It is therefore imperative for European governments to accept their responsibility. They should stop shedding crocodile tears at the death of migrants and refugees at European external borders then proceeding with the order of the day and pumping even more money into even stricter border controls. More than two decades of billion-euro investments in border controls have not only failed to stop migration; by this action Europe has also contributed to the death of thousands of migrants and refugees.

Taking responsibility means that European governments have to grant refugees access to asylum procedures, rather than driving them literally to their deaths. This could be done by, for example, reforming the Dublin Regulation. This regulation states that refugees can only request asylum in the first country they reach. Reforming this regulation could create the possibility to request asylum in other European countries. Southern-European countries certainly need to be reminded of their responsibility to offer migrants and refugees a decent reception. For Northern European governments, however, the simple willingness to receive refugees will be a plausible gesture of solidarity too. Even more repression is a disastrous and fatal solution.

"Borders are necessary and the EU is not being inhumane when it stops the flow of refugees;" says German daily Die Welt. “Obviously, the images of drowned African refugees on the coast of Italy are distressing," says the paper, adding –

But attributing them to the responsibility solely of Europeans by saying that they are isolating themselves is absurd. We need borders and each state must have the right to regulate immigration and asylum. Those who think this is insufficient and heartless should introduce open borders but should not be surprised if Europe is overrun, something many people fear. By adopting only the refugees' perspective, [...] one does not see far enough, because those that accept the immigrants or the refugees must be prepared to do so. Tolerable rules are required.