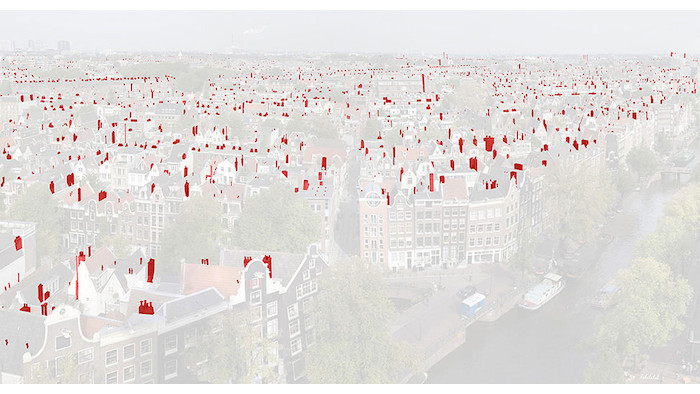 The Dutch, stuck between Atlantis and the continent

Many Dutch citizens look at the EU as if they are, like the British, complete outsiders. In this political context, the government goes about its business in Brussels, without spilling too many words about it at home for fear of upsetting citizens.

In The Netherlands, these days, the streets are full of posters with just one word: Nexit. They are hung there by the far-right Party for Freedom. Meanwhile Thierry Baudet, the leader of a new, rival far-right party called Forum for Democracy, dominates talkshows and newspaper columns with persistent pleas to “return” sovereignty to the country. In March regional elections Baudet’s party scored around 14 percent of the vote.

At the same time public opinion polls show that a solid majority of Dutch citizens think the country’s membership of the European Union is beneficial. According to the most recent Eurobarometer 86 percent of the Dutch would say “no” if a Dutch exit from the EU would be put to a referendum.

How to explain this contradiction? Why is one of the founding countries of the EU, happy to participate in all forms of European integration including the euro, the banking union and Schengen, ferociously debating a Nexit that an overwhelming majority of Dutch citizens opposes? Many factors play a role here. But there are two important undercurrents.

One is that Dutch politics is currently extremely fragmented – to such an extent that Forum, last March, became the country’s largest political party. Prime Minister Mark Rutte’s party, the right-wing liberal VVD, is a close second. In the run-up to the European elections the two parties are running neck and neck. This strong fragmentation of the political landscape – which leads to polarisation, too, with so many parties that loudly profile themselves in a relatively small space – used to be called “Lebanonization” or “Balkanization”. Now, thanks to Mr Baudet’s aggressive attack politics, there is a new word for this: “Dutchification”.

The second, and deeper, undercurrent is an old ambiguity about Dutch political orientation in Europe. The Netherlands lies on the continent. But the Dutch tend to look west more than east. Culturally many feel more Atlantic than Continental. As traders and seafarers, they have always admired the Anglo-Saxon culture. This trait has shaped the Dutch outlook on Europe.

In the early days of European integration, just after the second world war, the Dutch were interested in setting up an Atlantic Union for trade, with the UK, the US, and maybe others. This never materialized. Instead, Germany and France founded the Coal and Steel Community in the early 1950s. The Dutch were unhappy about this: the two largest countries in Europe, none of them trusted by The Hague, joining forces – this was not their idea of a happy future.

However, the Dutch had just lost their colonies. Germany was booming; the Dutch profited for a recent trade agreement with their large eastern neighbour. They understood that France and Germany were serious and would go ahead, whether the Dutch joined or not. In that case the Netherlands would be isolated on the continent. So, after difficult deliberations, the government in The Hague decided to join this new France-German club, and try to water it down from the inside.

This is what they have done ever since.

Since becoming members of the Coal and Steel and later the Economic Community, the Dutch tried hard to get the UK to join. In 1973, after several French vetos, they succeeded. Finally, they managed to combine Atlantis and the Continent. After the UK accession the Dutch became more confident in Europe. Feeling better with the British on their side they became an active, even enthusiastic member, joining all forms of European integration. With the UK, the Dutch fought for free market causes such as the internal market and free trade; with others, they prepared Schengen and a monetary union.

During the 1990s the United Kingdom gradually became more sceptical about the EU. As a result the old Dutch mental split resurfaced. The Continent and Atlantis drifted apart again. Which position to take? The Dutch typically chose not to choose. Governments kept going with the continent, since this clearly was in the Dutch economic and political interest, while partly echoing the Eurosceptic British discourse.

Many Dutch citizens look at the EU as if they are, like the British, complete outsiders. Dutch school children learn that the EU is “a market”, good for Philips and Unilever. The political story of Europe, which is about “never again” and about Franco-German reconciliation, never gets told. The fact that the Dutch speak better English than French or German, enhanced this Anglo-Saxon, non-continental prism. Former British Prime Minister David Cameron was very popular in The Netherlands. In this political context, the government goes about its business in Brussels, without spilling too many words about it at home for fear of upsetting citizens.

Brexit only widens this mental split. Thierry Baudet mercilessly exploits this on the far right. He considers Rutte a hypocrite: why does the Prime Minister agree with new European policies without ever really defending them at home? He keeps poking and challenging Rutte to show his true European colours. Perhaps tellingly, the only European election debate that draws massive public interest in The Netherlands is a debate between Baudet and Rutte – none of them candidates. This clash is about the old Dutch ambiguity about Europe, finally coming to a head.