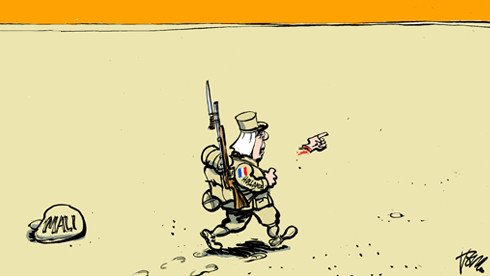 The Europeans aren’t fit for purpose

France’s war in Mali is a fight for all of Europe that France is fighting alone, writes the Brussels correspondent of the SZ. Brushing Paris off with a few aircraft isn’t just shirking on the part of its European Union partners, it’s a fatal blow to a common European defence.

If the situation in Mali were merely just about Mali, French soldiers would hardly have been sent to fight against Islamist militias. The interests of the former colonial power in Africa aren’t great enough for France to take that risk. France has intervened because the problem state in the Sahel threatens to blow up into a serious threat to Europe. And it has gone in alone, it is because the other Europeans have shirked the responsibility. That says a lot about the state of the common European security and defence policy. And none of it is good.

If Paris gets nothing more from its European partners than some fraternal backslapping and a few transport aircraft, then something is going wrong in the European Union. To block the take-over of Mali by Islamists and terrorists is truly in the European interest.

Europe has known of the danger for more than a year. In the hands of Al-Qaeda in the Magreb and their like-minded friends, Mali would turn into an Afghanistan on Europe’s doorstep: a starting point, training camp and rest area for international terrorism.

This EU has certainly recognised this risk, but has been unable to agree on a comprehensive response. A small training mission for the Malian army was the most they could come up with: Europe’s joint will wasn’t capable of any more. There was no precautionary planning for a response to a military emergency, which is what the French are now reacting to.

The news that the training mission is now to be sped up verges on the comical. On the one hand, the problem won’t be fixed by the other Europeans looking on with folded arms as the French step up to the line for their common interests.

And on the other hand, the Malian soldiers can hardly have time for European trainers while in the centre and north of the country they’re bogged down in fighting the militants. Developments have overtaken the European plans.

Today, rather, the EU must answer the question whether they are truly serious about a common security policy. That would mean not leaving France on its own militarily here and now. Former French Foreign Minister Hubert Védrine recently gave a damning verdict on the common security and defence policy that the EU has been working on for the last two decades. If the leaders of the EU countries cannot agree quickly on reliable principles for their cooperation, then the European claim to be a world power is finished. Védrine could probably not have imagined that Europe would be so quickly put to the test and that the decisive test would be in the Sahel.

There is strong evidence that Europe is failing that test, because the foreign and security policy interests of the EU member states are still too far apart. Just to take the example of Mali, all the Europeans agree about the danger – but not about how to deal with it. Nor about the fact that in such situations you have to prepare for anything, even war. European security policy suffers from disunity, lack of capability, and lack of will. Those will not fade away so quickly.

Nonetheless, the other Europeans must now help Paris militarily. It is a question of solidarity, but there is also a long-term reason: those who want to keep the door open for a true European security policy must not run the risk that Paris will have to call NATO if it cannot go any further militarily. That would be the ultimate proof that the Europeans simply aren’t up to the job.

The view from France and Germany

When he launched the military operation in Mali, French President François Hollande was probably expecting, as was the case with Libya, that his European partners would offer a helping hand. However, five days after the start of the war, this has not proved to be the case. “Wherever they look in Europe, French diplomats and France’s general staff are likely to find only good excuses,” writes Le Figaro. “Germany, the most recent European power to increase its military budget, cannot commit soldiers or armoured vehicles without a vote in the Bundestag — a scenario of which Angela Merkel will be wary in an election year,” even though she has voiced her “support” for Hollande.

In Berlin, Die Tagesspiegel is critical of Germany’s attitude —

Germany would like the French – and the Germans themselves – to believe that it will stand by its closest European ally. However, it has ruled out deploying combat troops and is satisfied to provide only logistical support. If, instead of fluttering about, Hollande took this affront seriously, the Franco-German axis would be severely tested. Today everyone, with the exception of the jihadi groups, is putting on a front.

As for the other European partners, not much can be expected of them, remarks Le Figaro —

Italy, which is in the throes of an election campaign, and Spain, which has been worn out by the crisis, have shown no enthusiasm. In the north, seasoned NATO contributors the Netherlands and Denmark have very little interest in Africa. In the east, Poland has pointed out that it still has commitments in Afghanistan…
Neither the debate launched on Tuesday in the European parliament, or the meeting of the EU’s 27 foreign ministers scheduled for Thursday will change this situation. At best, it will be a chance for diplomatic leaders to take stock of the disappointing outcome of the “Initiative for the Sahel”, which was designed to reinforce countries like Mali and launched with a great deal of fuss in March 2011. Although Brussels did allocate funding, the military-security component of the strategy never followed.
The absence of reinforcement from the EU will complicate general staff calculations for the “second phase”, in the wake of several days of airstrikes which have succeeded in halting the jihadi advance.