Ideas The referendum in Catalonia 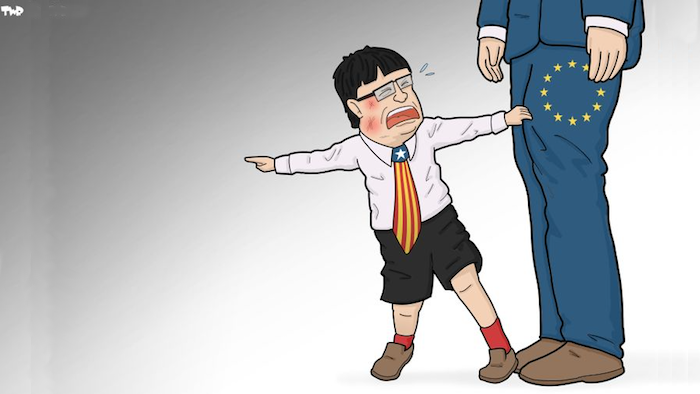 Ideas The referendum in Catalonia

The suicidal drift of the Catalan independence movement has its roots in an intense process of appropriating Catalonia’s social and political space – to the point of stifling any option contrary to its plans. A story of how we have ended up in this situation.

What has happened in Catalonia over the last few years can be described as a ‘great fraud’. It is a fraud that finds its roots an intense process of appropriation of Catalonia’s social and political arena until the point where anyone else’s opinion is stifled. Because it is a fraud to say, as Catalan nationalists claim, that the rights of Catalans have been crushed, that they have not been allowed to vote freely, that they have “been robbed”, or that their language or culture have been “suppressed” by Spain. What has happened in Catalonia is that the traditional “catalanismo” protected by the generosity of the Spanish constitution of 1978, which gave very ample autonomy to Catalonia, has turned into nationalism and, from this, into calls for independence, for reasons of greed, opportunism and internal politics. And nationalism is unstoppable, because it seeks a dichotomous relationship, of good versus evil, of exclusivity, of the obligation to take sides.

Add to that a de facto control of the language, education, culture and media outlets, and we have dismantled the elements of a ‘raw’ nationalism, totalitarianism – that which has historically destroyed Europe – and reconstructed them as a post-modern style of nationalism, social-media friendly, a nationalism of selfies with flags, of the audiovisual imagination, with an impeccable marketing strategy. It has been largely developed since the Constitutional Court’s ruling on the Statute of Catalan Autonomy in 2010 – that cut part of the Statute – after a disastrous negotiation process and, more concretely, with the massive staging of the Diadas (Catalonia’s national festival).

An absurd ethnic chimera in a democratic and open Spain. And this is what has manipulated and convinced many Catalans – though not 50 percent of the population, according to the results of the last regional elections. It is a process that has come to a head before the backdrop of the economic crisis, which welcomed people into the ranks of the independence movement who had been hardest hit, but who until that point had had no nationalist leanings. It is a phenomenon that can be explained by the global uprising against the inequalities ushered in by neoliberalism, which is now strangely allied with the most nationalist of Catalonia’s nationalists, on a clear basis of supremacy over ‘poor’ Spaniards. The story is completed with the search for a scapegoat: “Spain”, or the slogan “Spain is robbing us”, in the role of the villain.

The latest chapter in this ruse concluded on 1st October, with the suicidal call for a referendum on self-determination made by a politician who has already admitted to being predisposed towards suicide, Carles Puigdemont, the President of the Generalitat, despite it being declared illegal by the Constitutional Court. To examine on whom the burden of proof falls, it is enough to say that on 6-7 September there was a coup d’état in Catalonia, against the State’s institutions from within, and ignoring the non-nationalist half of its parliamentary representation.

The government, formed by a coalition of right-wing independence supporters and the left-wing radicals of the Popular Unity Candidacy – which now leads the insurrection in the streets and is relentlessly hounding any opposition in a purely revolutionary strategy – ignored the Statute of Catalonia, with all its legal provisions, and the Spanish constitution to approve two laws: one aiming to hold a referendum on self-determination and the other to declare independence unilaterally. Despite repeated judicial orders, the Catalan government decided to continue along its suicidal path, searching until it had found a fitting image – that of victimisation, of “police officers from the repressive State against defenceless democratic civilians”, in the absence of the regional police, converted into a political police – to find an iron-cast excuse to declare Catalonia’s independence, which is the choice that had already been made ahead of time. The cynicism and irresponsibility are immense.

In Europe we already know about the manipulation of primal feelings and the half truths or complete falsehoods that are stirred up in referendums, as we saw perfectly with Brexit. Mariano Rajoy’s government must take the blame for its lack of initiative and its abdication of responsibility, trapped between the institutional compromise of carrying out the law and of avoiding the photo finish – in the form of violence – that nationalist victimisation was seeking in its quest for front page coverage in the international press, and that it finally obtained. Rajoy’s style of governing has not exactly been characterised as reactive and here was a case in which it had to be, accelerating the course of events.

The events are unprecedented in modern European history and have stunned all Europe’s governments and the EU – for whom it is an unwelcome question, since it adds one more problem to the identity crisis in which Europe has been submerged for many years. Not to mention the fact the problem could ricochet back home, via member states’ own nationalist movements. What we are seeing now is a key moment, but with misguided interlocutors who are not suited to restoring order and dialogue, a word on everyone’s lips these days but which seems impossible at this point. We need a different starting point if we are to reach a valid agreement (through an official referendum, hardly a likely option for Rajoy since it lies outside the constitutional framework, or a new statute with or without constitutional reform, an option that supporters of independence would not accept given their hyperbolic politics).

If Puigdemont declares independence in the coming days, as he has already indicated, Rajoy will activate article 155 of the Spanish Constitution, thus taking away Catalonia’s autonomy. Doing so will introduce new conflicts that no one would have thought possible. But, faced with the suicide that Puigdemont is pulling Catalonia towards, what is the correct way to defend the rule of law and democracy – the true kind, the one that represents all citizens – that are Europe’s fundamental values?