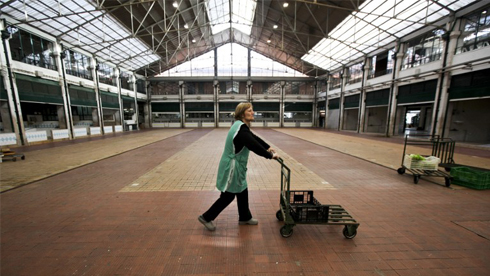 European leaders are counting on Portugal to set an example of how austerity can succeed when it is applied seriously. Sadly, despite a unprecedented tightening of the screw, Lisbon is still being forced to sell off its “crown jewels” to halt its spiralling debts.

‘Everything must go!’ Ribeira Market, Lisbon.

Little by little, the Portuguese state is going down in defeat. In April 2011, when the country got a loan of €78bn from the troika (EC, ECB and IMF) to avoid bankruptcy, it committed itself to privatisation. But under the leadership of Passos Coelho, a model student of the fiscal discipline demanded by the troika, the sell-off of the “crown jewels” – what’s left of them, that is – has sped up.

The aim is to slash the public deficit. At the end of 2012, to the satisfaction of the troika, the country closed out its accounts with a deficit of 5.6 per cent of GDP, down from 6.7 per cent a year earlier. The goal is to get to 3 per cent by the end of 2014.

Like other Portuguese assets, plunged into recession and falling victim to savage budget cuts, the naval shipyards of Viana do Castelo have been put up for sale. Since 2012, Norwegian, Brazilian and Chinese parties have tried to take over the country’s leading shipyard. But negotiations with EMPORDEF, the state agency that owns the shipyard, have dragged on.

“It’s the uncertainty that’s left everything at a standstill,” says an irritated Antonio Costa, chairman of the works council. In the end, the Russian group RSI Trading, under tycoon Andrei Kissilov, with no naval experience, should be taking it over by March for €10m. Incidentally, the state will take on the hefty liabilities of €280m. It’s a sad fate for these iconic shipyards – nationalised after the Carnation Revolution of 1974 – which, until the 1990s, were flooded with orders and employed up to 2,800 workers.

Against the backdrop of huge cranes standing still against the skyline, hundreds of workers, heads down, walk quickly towards the company canteen. It is one o’clock. Lunch is waiting. The workers are the 526 employees of the Viana do Castelo shipyards of northern Portugal, tucked between the River Lima and the Atlantic Ocean. This morning, like every morning, they came in at 8am and settled down to doing nothing for the rest of the day: playing cards, chatting, killing time; about 30 of them put in a little work repairing a ship. Since 2007 the shipyards have gone through a steady decline, and in recent months, with no orders coming in, the work has trickled almost to nothing. While a contract for two asphalt tankers – to be delivered in 2014 – was indeed signed with Venezuela for €128m, the work was stopped. Why? No one really knows.

“What we see here is psychological terrorism,” confides Antonio Costa, features drawn and face weary. “Nerves are frayed, and some people have been suffering anxiety attacks. Doing nothing, knowing nothing – it'll break your spirit.” Costa started working here at the age of 14. Most of the workers have spent forty years on these platforms: their entire working life. “Most would like to take early retirement at 55, but under the new law this isn’t possible any more,” says his friend José Pereira with a touch of sadness. A dyed-in-the-wool supporter of austerity, the conservative government under Passos Coelho has struck early retirement off the books and pegged it at 65.

Losing control of their destiny

For the 80,000 or so inhabitants of Viana, like for the rest of the country, the powerful wave of privatisation is causing a lot of worry. “Some of these state enterprises are gems, others are junk buckets, but they’re all strategic assets. And we’re losing them forever,” worries Bernardo S Barbosa, head of the local weekly Aurora do Lima. The Socialist mayor, José Maria Costa, shares a growing national concern: the feeling that the country is losing its sovereignty. In a vast room at City Hall, this engineer by training reacts very angrily to the policy of the executive: “By taking away our public assets, which are so vital, to the benefit of foreign companies, and private interests at that, we’re losing control of our own destiny. I even fear that in the end it will affect our freedom and democracy.”

Around the area, it’s the fate of the naval shipyards (ENVC) that is causing the most anxiety. After the public hospital, the municipality and the German company Enercon (which employs 1,200 people manufacturing wind turbines), ENVC is a major employer in the Upper Minho region. Especially since, once orders do come in, the work at the shipyards has a multiplier effect on all the peripheral businesses – from transport companies to SMEs manufacturing assembly parts, to local businesses. “Since the yards have shut down it’s been a depression around here,” laments hotelier Lucilia Passos Cruz. “When they’re sold off, foreign workers will fill up the restaurants and hotels. All that will be left to us will be tourism and our surfing beaches.”

There are alternatives, many believe. “Instead of selling our naval shipyards,” says Mayor José Maria Costa, “the state could retain control and go into partnership with foreign ship owners. Countries like Brazil, Mexico and Chile have a great need for ships. More than 3,000 jobs could be created.” Branco Viana, president of the Trade Union, agrees: “The state ought to keep at least 35 per cent of the shares. The Russians, the prospective buyers, have promised not to touch the jobs. In five years, though, they may well walk away, and 526 workers will be left to their fates. And we, the unions – who can we turn to then to protest? The state can wash their hands!”

Portugal is losing more than 100,000 jobs per year and within five years, the Portuguese economy will have lost more jobs than the population of Lisbon, writes weekly Expresso. The Bank of Portugal's estimates for future employment levels make grim reading. At the end of 2013 Portugal is expected to have 626,000 fewer jobs than in 2008, the first year of the financial crisis.

According to data revealed by the National Statistics Institute on February 13, unemployment in Portugal reached 16.9 per cent in the last quarter of 2012.
“It was a dark period for the Portuguese labour market”, sighs Expresso, adding –

a major concern is the more than 500,000 unemployed people who do not receive any benefits. For many of them, the consequence of the situation is poverty.