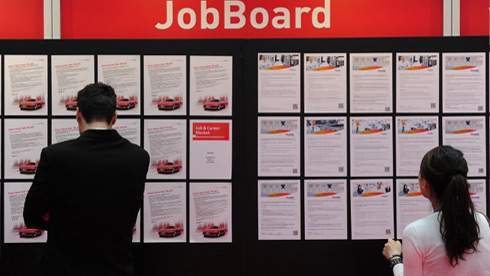 The ‘lost generation’ that never was

With every serious crisis we feel sorry for young people who cannot find work, calling them a “lost generation”. Well, there have been many such generations in history and they always succeeded in the end, writes DGP.

Job advertisements at the Job and Career Market in Hannover (Germany), April 2012

They were supposed to be our hope and instead have become a burden. More than 400,000 young Poles are unemployed and few call them anything other than a “lost generation” In fact, the disease is all over the continent; elsewhere in Europe, especially in the south, things are even worse. Eurostat reported in October that the unemployment rate among under-25-year-olds in Poland was at 27.8 per cent, compared with 55.9 per cent in Spain, 57 per cent in Greece or 36.5 per cent in Italy. Even in a country as wealthy as France one in four young people are jobless.

Such statistics are impressive but they are also misleading. This is because they only include those who either are employed or not, failing to take into account all those who study, undergo vocational training, travel or do nothing by choice. That is why it is more appropriate to speak of NEETs (“not in education, employment, or training"), an acronym coined by the International Labour Organisation.

When we apply this category, it turns out that the percentage of Poles aged 15-29 who neither work not study stands at 15.5 per cent. This is a lot –a rise of 22 per cent since the crisis began –but it means that only one in six young Poles face gloomy prospects rather than one in two. One can hardly speak of a “lost generation” when five-sixths of it are doing something sensible. It is the same case elsewhere in Europe; the NEET ratio for Greece is just 23 per cent, while in Spain it is at 21 per cent. In countries such as Netherlands or Austria it is as low as 5-8 per cent.

Young, unemployed and with prospects

Paradoxically, as especially the Spanish example demonstrates, the high proportion of young unemployed people can actually be a source of hope. The sharp rise in joblessness levels in Spain in recent years has been caused less by the recession and far more by the labour-market reforms launched by Prime Minister Mariano Rajoy. ‘Employers are now able to lay off redundant staff more easily, but when market conditions improve, they won’t be afraid to start hiring again’,said Jorge Nunez, expert at the CEPS think-tank in Brussels.

Before Rajoy’s reforms, Spanish companies had to negotiate changes in employment terms with industry- rather than workplace-level union organisations and layoffs meant the necessity of pocketing out hefty severance pay as well as, often, of proving to the court that the personnel reduction had been necessitated by “objective”economic factors.

Despite such rigid regulations – a legacy of the Franco era –Spanish employers were not loathe to start hiring when the economy went on a fast-growth track. Following the country’s EU accession in 1986, unemployment among young people halved within three years to 18 per cent. Will the Spaniards get out of trouble as quickly this time?

Zsolt Darvas at the Bruegel Institute in Brussels said:

"This is the best-educated young generation in this country’s history. Thanks to Mr Rajoy’s reforms the Spanish economy’s competitiveness has improved quickly; the country had a trade deficit of 11 per cent of GDP only five years ago and today boasts a 2 per cent surplus".

Poland represents a similar case. The country has already seen two “lost generations” in 1992/1993 and 2002/2003 and is now seeing its third. Even if we settle for the Central Statistical Office’s pessimistic data, the proportion of unemployed under-25-year-olds back in 1995 was twice as high as it is today. Education is another favourable factor, as the proportion of students has risen five-fold since 1990 and the percentage of diploma-holding workers is 2.5 times higher.

Crisis periods have always been a time of intense restructuring for the Polish economy. Labour productivity is 20 per cent higher today than back in 2008, which means that four people generate the same output that five were required for back then. Cutting-edge industries, such as advanced electronics, molecular research or high-class automotive components, have seen vigorous growth, causing more and more multinationals to shift their manufacturing operations from southern to eastern Europe, notably Poland.

One could say that the higher unemployment is a price Poland is paying for productivity gains that will give it many years’advantage over rivals. Eurostat figures show that Poland’s productivity rate was just 57 per cent of the EU average in 2012, compared with a figure twice as high in the neighbouring Germany.

Germany serves as an example of how effective labour-market reforms can be in improving prospects for young people. Unemployment is at its lowest today since unification, both among young people (12 per cent) and overall (5.4), and is gradually heading towards full employment. But a decade ago, before the reforms introduced by Chancellor Gerhard Schröder, Germany was the “sick man of Europe”in labour-market terms.

‘We should be copying their vocational training system. Young people’s employment prospects depend partly on themselves and on whether they are able to adapt their plans to market realities’, said Katinka Barysch at the Centre for European Reform in London.

There are many indications that the worst is already past for young people, both in Poland and Europe. Last year may have seen widespread economic stagnation, but the EU avoided the worst — a eurozone break-up and a resulting recession that it would be recovering from for decades, if it survived at all, that is.

While this may be hard to believe today, only two or three years from now, rather than accepting whatever job is offered to them, young people with the right qualifications may actually be dictating terms to employers.