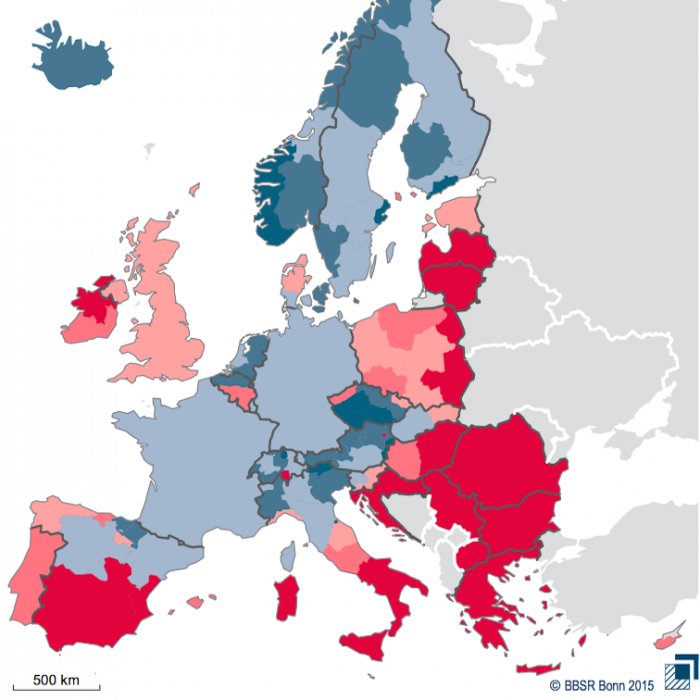 The European Union's Europe 2020 strategy for development aims to save from poverty at least 20 million people at risk of social exclusion by 2020, among other objectives. At the time of the strategy's launch, in 2009. 117 million Europeans were at risk.

This map shows the percentage of European citizens at risk in 2013 in different European regions. The regions in blue are those where the number of people at risk of poverty conforms to the objectives set out by the Europe 2020 strategy: the darker the colour, the lower the risk. The regions in red are those which are still far from having achieved the objectives. The darker they are, the more their inhabitants are at risk. The dark red signals a percentage equal to or greater than 29%. The zones where the trend is positive neighbour each other and cover practically all of central and northern Europe (with the notable exception of the British Isles). The situation is tougher in eastern and Mediterranean Europe, even if, in Italy and Spain, there are stark regional differences.

This map is based on the data provided by Eurostat and was published last May by the BBSR, the Bundesinstitut für Bau-, Stadt- und Raumforschung, a German institution examining questions of geography and urbanism.

You can unsubscribe anytime *
Categories