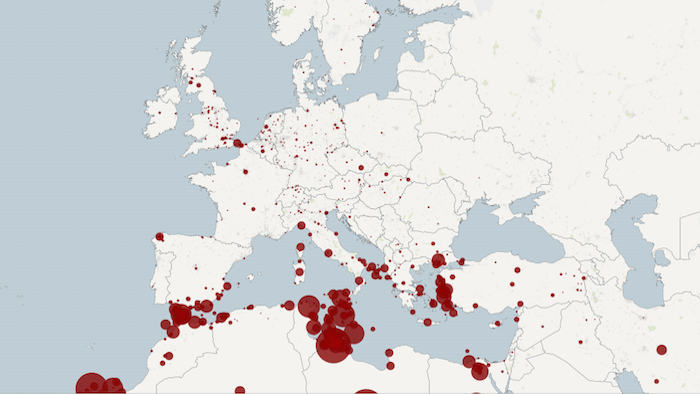 By Lorenzo Ferrari.
On Thursday 25 and Friday 26 June, EU heads of state and government chiefs met in Brussels for a summit in part focused on immigration. Since the beginning of the year, 100,000 people entered Europe across the Mediterranean and Turkey. The principle of distributing immigrants by quotas for each country, proposed by the European Commission, has been strongly opposed by a number of states.

Since the year 2000, more than 29,000 migrants have died trying to reach Europe. The data and the stories of these people have been systematically collected by The Migrants' Files, a European journalistic initiative. Based on data gathered by this organisation, the journalist agency Journalism++ has created this interactive map showing where the most fatal incidents involving migrants have happened over the past 15 years. The larger the circle, the greater the number of deaths.

The European region with the largest share of deaths is the Strait of Sicily. Many tragedies have also happened near the Spanish coast (the Canary Islands and near the Strait of Gibraltar) and in Greece. Most incidents took place at sea or along the coast.

You may unsubscribe at any time. Your email address will not be shared with third parties. *
Categories
Migration and asylumSocietyEuropean UnionGreeceItalySpain