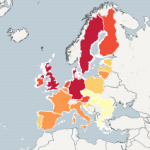 The map showing who should tackle the refugee crisis

This map, by Giulio Zucchini, shows who Europeans think should take decisions on migration. According to the survey, which was conducted in all member states in September 2015, nearly two thirds believe decisions on migration should be taken at the EU level rather than nationally, while eight out of ten said asylum seekers should be “better distributed among all EU member states”. However, the answers vary considerably from country to country.

Meanwhile, European Commission president Jean-Claude Juncker called a mini summit with the leaders from Austria, Bulgaria, Croatia, Germany, Greece, Hungary, Macedonia, Romania, Serbia and Slovenia to discuss the refugee flows along the Western Balkans route. "The objective of the meeting will be to agree common operational conclusions which could be immediately implemented," a Commission's statement said.