Ideas Elections in Italy
Emma Bonino at a +Europa rally. 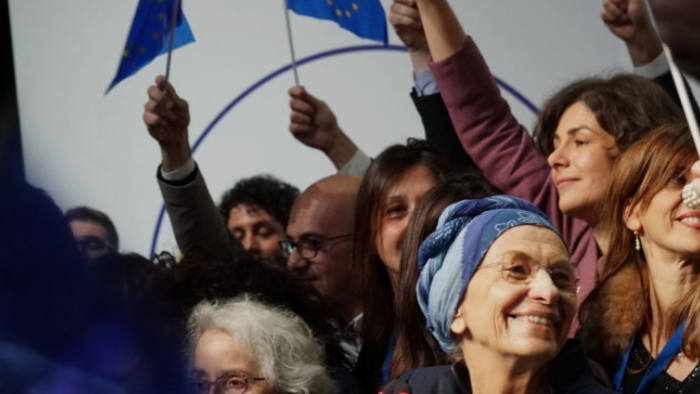 As the March 4th elections approach, +Europa, led by former European Commissioner Emma Bonino, show that there is still room for pro-Europe and federalist movements. But will they manage to convince Italians to send them to parliament?

Emma Bonino at a +Europa rally.

Last autumn, while I was outside Rome, working on an story, I had the opportunity to meet one of the experts charged with redesigning the electoral colleges in view of the March 4th election (the date had yet to be revealed) and the new electoral law called the Rosatellum. “The only certainty is that there will be no winners”, the expert told me, anticipating what the polls have kept telling us in recent weeks – that the tri-polar division of Italian political life, under a system which mixes first-past-the-post and proportional representation, will likely prevent a clear victory for any camp.

The political history of western democracies, however, teaches us that electoral surprises are always just around the corner – look at Donald Trump, Brexit or Emmanuel Macron. An unexpected result, then, cannot be excluded.

This election does seem above all an opportunity to take positions. Some observers go so far as to call it a useless vote, expecting a second round in the near future, or waiting for a new political cycle with a less worn-out leadership. And yet, in recent weeks there seems to have emerged an element that could change the face of European politics. This new element is +Europa, led by Emma Bonino. +Europe should be studied beyond Italy, since it may transform the political discourse that’s been imposed on European democracies over the last twenty years.

During this period, eurosceptic forces, often ethno-nationalists and xenophobes, have grown in number. While incapable of taking power on their own, they have dictated the agenda of more moderate movements and put the themes of identity, immigration and islam at the centre of public debate, in tones of closure, fear and withdrawal.

This was especially true for the French right of former president Nicolas Sarkozy and his Prime minister François Fillon, now led by Laurent Wauquiez, with the electoral blackmail of the Front National. In Italy it can be seen in the relationship between former PM Silvio Berlusconi and current Northern League leader Matteo Salvini. Moreover, the themes of euroscepticism and sovereignty have spread to the left too, often affecting avowedly social-democratic movements.

Eye-opening, in this regard, was the rift within the French Socialist party in 2005, when for purely electoral considerations, under pressure from the radical and sovereigntist left, numerous representatives (led by former Prime minister Laurent Fabius, and including his colleague Manuel Valls for a time) declared their support for a ‘no’ to the referendum on the European constitutional treaty.

One is also reminded of the time when Matteo Renzi, on the eve of the referendum of December 4th 2016 on constitutional reform, decided to remove the European flag from a press conference, before attacking EU bureaucracy in the hope of attracting the eurosceptics. Only a few weeks earlier, Renzi had rendered homage to Altiero Spinelli at Ventotene, the island where this “Founding Father” of Europe was sent to exile by Mussolini. Perhaps with European federalists in the majority and in parliament, the ex-president of the council would have been less eager to instrumentalise such topics.

Today the supporters of the United States of Europe are probably a minority in public opinion. Mobilising around a figure like that of Emma Bonino in Italy, however, they may finally push back against the rise of euroscepticism and, in their turn, dictate the political agenda.The presence in parliament of openly federalist groups like +Europe or Insieme would potentially shake other moderate forces out of their equivocacy, and force movements on both right and left to choose a side: with those who open the field to extremists, or with those who insist that the United States of Europe is a necessary political condition for confronting the challenges of modernity.

Perhaps it’s no accident that Renzi’s Democratic Party, founded as a veritable pro-Europe party (even if they forgot the blue flags during their founding congress in 2007), held a demonstration in Milan last January entitled “The future is called the United States of Europe”. Under pressure from +Europe, the Pd is placing a stronger claim on Europe. And if the Italian experience teaches Europe a lesson? In democracy, politics is among other things a balance of power. The pressure from the far-right demonstrates this repeatedly. But as the going gets tough, the pro-Europeans need to get going.