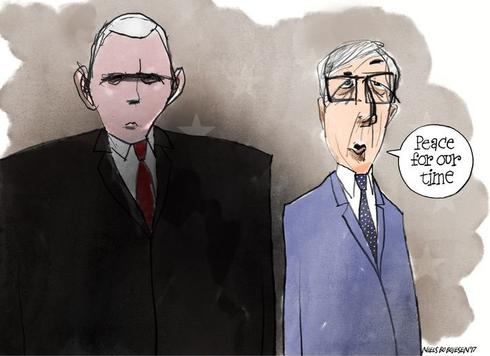 US Vice-president Mike Pence paid a visit to Europe to reassure the European Union and NATO about Donald Trump's views on both organisations. Saying he was speaking on behalf of the president, Pence expressed the "strong commitment of the United States to continued cooperation and partnership with the European Union" and the US' "strong support" for the Atlantic alliance.

The statement came after repeated criticism of the NATO alliance and apparent delight for Brexit from Donald Trump and was welcomed by EU leaders such as the Commission's president Jean-Claude Juncker, with "cautious optimism".

"Peace for our time" is the statement the then British Prime minister Neville Chamberlain made as he came back from the 1938 Munich conference, in which France and the United Kingdom agreed that Adolf Hitler could annex Czechoslovakia – purportedly preserving peace.