unknows What is news? 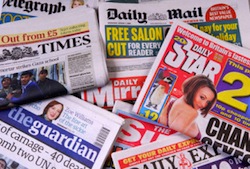 unknows What is news?

The prince and the public interest

The Sun newspaper’s publication of nude photographs of Prince Harry has reinvigorated the hue-and-cry about the antics of the British tabloids, but amid the complaints, the issue of what news is actually for is the buried lede.

So far 850 complaints have been made to the Press Complaints Commission about the decision of the Sun to publish candid nude photographs of Britain’s Prince Harry. Coming at a time when the press is under political scrutiny, many feel the Sun‘s editorial decision has handed Lord Leveson the corpse of press freedom on a plate.

Perhaps. Or perhaps not. In fact, in defying the monarchy’s demand to effectively censor themselves, the Sun has indeed made a clear demand for freedom of the press. But freedom for what purpose, precisely?

It seems likely that Rupert Murdoch, a curious figure who is both immensely wealthy and powerful and yet remains disliked as a déclassé outsider, chose to allow his newspaper to run the photographs out of spite, or at least to show two fingers to the Leveson Inquiry into press ethics. Certainly Mr Murdoch’s own message on the social network Twitter, “Needed to demonstrate no such thing as free press in UK. Internet makes mockery of these issues. Ist amendment please”, implies as much.

The defence is simple: the photographs were already a mere mouse click away and had been published in newspapers outside Britain, including the Irish edition of the Daily Star, a hybrid newspaper half-owned by the the Star‘s publisher Northern and Shell. As such it is absurd that the act of printing photographs already widely available, including in Britain, on paper, should somehow constitute an offence.

Some have argued that lots of things unfit for publication are a click away on the internet, hardcore pornography for instance. True, but the difference is that hardcore pornography is not news, whereas the third in line to the throne, naked in a hotel room had already proved itself to be.

This, then, is the nub of the question: what makes something newsworthy? The term news itself is merely an archaic plural of new, so the Harry pictures certainly meet that definition. Any loftier definition of newsworthiness requires some serious thought.

Personally I don’t care what Prince Harry does, and I suspect many feel the same way, but a great deal of other people clearly felt otherwise. The interests of the public and public interest are not necessarily the same thing, but to defend a higher-minded vision of the public interest is increasingly difficult today.

Here’s why: news is a political, and democratic, business—but not in the way either of those words are bandied about today.

The politics of news

News is fundamentally political, but not in the sense of serving partisan ideology, though the partisan press does have a role to play. Instead, journalism is political precisely because it is not only a record of human events, but exists to make sense of these events. It is a guide to action. The agency lies, firstly, in the reporter collecting, sorting and assembling facts into a record of events, editors checking and re-sorting these records and publishing them and, finally, in the reader or viewer using the totality this information to navigate their way in the world. In short, news creates the ground for political actors and, as such, it is fundamental to the public sphere.

This is why an old-fashioned printed newspaper is democratic, but not in the manner implied by the counter-cultural internet boosters who understand “democratic media” solely to mean a media that is both unpaid and participatory.

The Harry photos were a form of gossip, obviously. But then, news without politics always is. If the process of politics, if political agency itself, is absent then news has no meaning and can have no instrumental value.

At its best journalism is an activity whose codified rules ensure it is not merely gossip, anecdote or conversation, and one that crystallises events more clearly than what unfolds before the naked glass eye of any smartphone camera. But if we want serious news then, one way or another, we have to be willing to pay for it and, more importantly, there has to be something at stake in society. Something that really matters; today’s tedious issues, such as a few percentage points here or there on taxation, are not enough. The news business is in turmoil not only because of the threat of new media, but because news itself has lost purchase in a society where politics, the primary commodity of that business, has been reduced to little more than a sham fight.

We can sneer at the tabloids all we like, or even make misty-eyed complaints that the popular press isn’t what it used to be under the likes of legendary Daily Mirror editor Hugh Cudlipp, but the truth is the decline of news is intimately linked to the state of politics—and the decline of politics came first.

Still, against the backdrop of the Leveson Inquiry and the do-not-publish dictate from the monarchy it’s hard to damn the Sun for publishing the pictures, even if it was little more than the act of one old-fashioned press baron thumbing his nose at actual princes, lords and barons.

Categories
Politics and democracySocietyThe media and freedom of informationUnited Kingdom