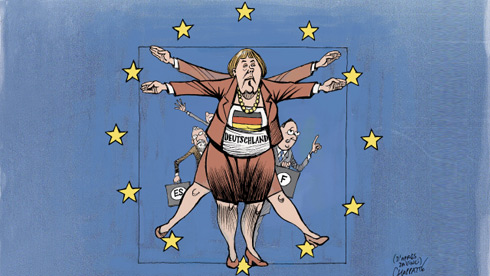 The problem is not Germany. It’s Europe.

Europeans are placing more hope in the September 22 German general elections than in May 2014 European elections. But German politicians are right to care about their country’s own problems first.

The political chart for Europe for 2013-2014 will begin to be drawn with the German general elections on September 22 and will close off with the elections to the European Parliament on May 25, 2014. In theory, the first should be of secondary importance and the latter should be crucial. But, in a paradox of European political life, the situation is rather the opposite: the first are crucial for the future of Europe, while the European elections will have only marginal importance.

Predictably, a large number of Europeans, who since 1979 have had the right to elect a parliament – and quite a powerful one, incidentally – will not bother going to the polling booths in May 2014; in the last European elections, in June 2009, the turnout was 43 per cent. However, aware of how important Germany has become for their own future, it is quite likely that, given the chance, many Europeans would indeed be interested in voting in the German elections.

All this speaks to us of a gigantic dissociation in the very organisation of the European Union: while goods and services, capital and people circulate freely throughout an enormous territory structured around a common currency, policy continues to be organised on the basis of a series of highly fragmented national units of very unequal size and capacity. This inconsistency between the boundaries of politics and economics is what led Emperor Marco Aurelio Antonino to extend citizenship to all inhabitants of the Roman Empire.

[[The edict of Caracalla, promulgated in the year 212, deployed an argument that would be rather topical today]]: “For it is proper that the populace not only should be subject to all the burdens, but also should share in my victory”. This linking between taxation and the legitimacy of a political system is thus a constant in history and has survived down to this day in the form of a very simple rule: one should vote where one pays taxes, and finance with one’s taxes only those things that one can vote on.

No path to federations

The problem is that, in the EU as it is today, things are exactly the reverse – or, at least from Germany’s point of view, they look very different. As surveys are bringing to light, a majority of Germans rejects any type of mechanism that involves taking on or pooling debts incurred by other countries. Hence, while a large propertion of Europeans would like the German elections to unleash a dynamic of changes that would lead to completing the monetary union by adding elements the Union currently lacks — Eurobonds, its own budget, a mechanism for shared management of banking crises, etc — the Germans appear to want at all costs that the elections not introduce any significant changes in their government’s current policy towards Europe. As the survey recently conducted by the Open Europe Institute points out, the Germans have zero appetite for policies that deepen European integration. On the contrary, the phrase “More Europe” is taken rather to mean “more control” over the rest of Europe.

As a result, the Germany that many would like to see emerge from the elections is simply not going to happen. With the polls in hand, it is quite probable that any possible future coalition government will have in it Angela Merkel, whose vision of Europe, Germany and the euro is crystal clear. With four more years in front of her, Merkel could loosen up on some policies, especially if her government will include the Social Democrats or the Greens, but it is hard to expect that this new government will take the lead in any initiative to reform the treaties that would set the EU onto a path towards a federation.

The recent clash between Chancellor Angela Merkel and the candidate of the SPD, Peer Steinbrück, which led Merkel to tag the Social Democrats as “unpredictable” in their policy towards Europe, has made it very clear, as the SPD has reminded us, that Merkel has not only enjoyed the legislative support of the members of the SPD throughout the legislature in pushing ahead with the most controversial measures (such as the successive bailouts to Greece and implementing the so-called European Stability Mechanism) but that this support has sometimes made up for the lack of enthusiasm for these policies from within her own ranks. In any case, from the point of view of the Chancellor, of her party and a vast majority of members of Parliament and citizens, the austerity policies that Germany has insisted on are the right policies, and ones that are having positive and visible results in improving competitiveness and exports from the Eurozone members.

Consequently, very little or nothing of what Germany sees around it these days encourages it to think it ought to make a 180-degree turnaround in its policies. The issues that matter to the Germans (infrastructure, public services, pensions, etc) are domestic issues and have no clear connection with Europe. And so, while Europeans are getting worked up about Germany and its elections, the Germans are continuing on their way and, time and again, rejecting the requests of those who are asking them for fearlessness and leadership. All things considered, they are not wrong. [[If Europe has problems, let them be resolved in the European elections]] – not in the German elections.