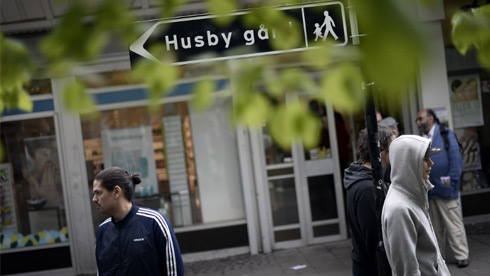 The problem with Swedish integration

Sweden wants to be a homogeneous and egalitarian society, but in reality it is a country with wide segregation and has great difficulty integrating its minorities, writes a Dutch journalist.

Before a demonstration against police violence and vandalism in the suburb of Husby, May 22, 2013.

Nazanin Johansson has never personally experienced any trouble with this. Yes, she was stared at, because of her dark hair, brown eyes and Persian appearance, and she knew she had to try harder than others. Yet for her, Sweden is a country where you can work your way out of a disadvantaged position. And where you can become a bold intermediary for an employment office in a notorious neighbourhood, just like her.

But it must be something you really want. And Nazanin sometimes has doubts about this when she talks to young people. “They want to have a job, but only if it’s a cool one. They don't want to start at the bottom. It’s easy to forget that it is also the mentality of many of these young people that is the cause.” Nazanin works at the employment office of Kista, a suburb of Stockholm, and the technical hub of the Swedish capital. But Kista is also situated between Rinkeby, Husby and Tensta, neighbourhoods that were in the news in May when young people there rioted.

For a week, cars went up in flames and there were fights with the police. The images from Sweden were seen around the world. Anger in the country where the government takes care of you from your first nappy change until your last breath? Racism and segregation in the most egalitarian country in the world?

The fastest-growing inequality in Europe

It soon became clear that this is indeed the case. While the world was not paying attention, the Swedish model had started to go downhill. After an economic bubble in the 1990s, the centre-right coalition of Fredrik Reinfeldt in 2006 cut back on public services, while at the same time lowering the top rate of taxes. Sweden still is an egalitarian society, but inequality here is growing fastest in Europe. As in the rest of Europe, migrants, low-skilled people and young people, especially boys, are in the worst position. And just like in the rest of Europe the rioters came from all these categories.

[[Unlike many European countries, where immigrant numbers are going down, Sweden issues more residence permits every year]]. The 110,000 issued in 2012 was a record. The refugees currently include predominantly Syrians, Somalis, Iraqis and Roma. It much harder for them to get away from the suburbs than for their predecessors. There are fewer jobs, society is more complex, and the thresholds are higher. “I would like to be a security guard, but I have to have a driver’s license,” says 22-year-old Egyptian Sameh Sakr from the Hallunda district. A driver’s license, he scoffed. “How could I ever afford it?”

There is a great deal of segregation in Sweden. In Stockholm, most migrants live in the garden cities along the blue subway line, nicknamed the Orient Express. These are concrete buildings of between three and seven floors that were built in the 1960s and 1970s. In some districts, 80 per cent are first- or second-generation immigrants, and 50 per cent are unemployed, compared to the 8 per cent of Sweden as a whole. One in four immigrants does not finish school. A total of 3 per cent of Swedish children are poor, compared to 40 per cent of migrant children.

The fact that rich and poor live separately is the case in all European cities. But Stockholm also consists of islands and vast green areas between the districts, nature that almost automatically turns wealthy districts into gated communities. The Nockeby district is full of perfectly maintained villas with alarm systems. Near Rinkeby subway station on the other hand, men are sitting on benches between the apartment blocks, doing nothing. There is a Turkish coffee house and a Somali bazaar, but not even a cash machine.

How can it be that egalitarian Sweden has allowed such alarming statistics and islands of discontent to grow to this extent? It is not that the government pays no attention to the issue. On the contrary, the Ministry of Integration and Employment wants to create subsidised jobs and make Swedish language lessons more diverse, so an Iraqi engineer is no longer taught at the same level as a barely literate Somali.

The Minister for Integration, Erik Ullenhag, says that Sweden will not introduce a stricter refugee policy, as the xenophobic Sweden Democrats demand. “We see this as an economic problem and a youth problem, not as a migration problem. If you have a harsh attitude in regard to migrants you harm your self-esteem as a country. Moreover, you undermine the position of those who are already here. Besides, Sweden needs migrants.”

Tobias Hübinette, a migration researcher of the Multicultural Centre in the southern suburb of Botkyrka, says that in practice migrants need lots of willpower, perseverance and luck to bridge the gap in wages, education and ethnicity. [[They are often not seen as Swedish, even though they were born here]]. For instance, if you speak Rinkeby-Svenska – Swedish with an accent – you can forget about a job.

A new ‘we’ for Europe

Ullenhag has a solution: a new “we” for Europe. “I don’t like the fact that ‘we’ always refers to the past in Europe. In the US, everyone who lives on American soil is American. ‘We’ is about the future there. It should be like that in Europe too.”

“It would already make a big difference,” says writer and journalist Viggo Cavling, “if we started by recognising that we are no longer the homogeneous country where everyone is equal”. But it is precisely this recognition that is difficult for the Swedish, says migration researcher Hübinette. “Nineteen per cent of Swedes now have one or two foreign parents. But we do not realise that yet. Don’t forget that Sweden has never had any colonies. Also because of this, Sweden is a nationalistic country. Swedes do not just like to do good, they also think that they are good. So we like to take in refugees, but find it difficult to recognise that we have allowed major abuses. We are running two decades behind in the multicultural debate.”