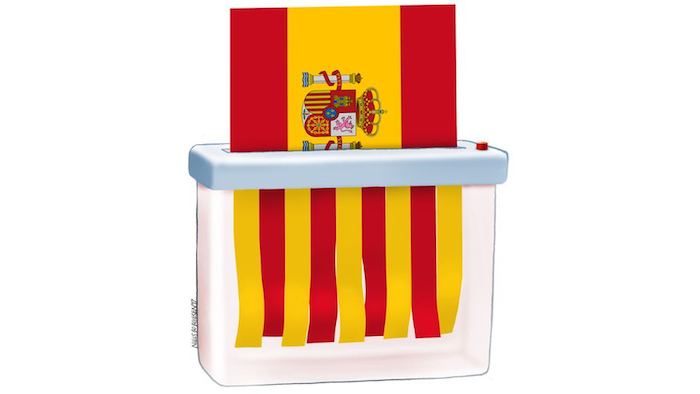 On 1 October the government of the Generalitat of Catalonia hopes to hold a referendum on independence that has been declared illegal by the Spanish Constitutional Court. The case is more comparable to Brexit than to the last Scottish referendum, the opinions editor of the newspaper El País argues.

At this stage, everything should appear immensely familiar to us. First off, we are dealing with a collection of irresponsible and opportunistic politicians. There, it was a certain David Cameron and a divided Conservative party that used the EU to eliminate its adversary. Here, it is the corrupt political elite of Convergència [one of the parties in the Catalan coalition government], which has thrown its lot in with a cause led by radicals in order to win back the support of its citizens.

And we are also seeing the misuse of language. There, it was Brussels stifling us; here, it is Spain stealing from us. There, it was returning sovereignty to Parliament; here, Parliament should not be subject to the law, but only to itself. There, it was about taking back control; here, it is about granting ourselves the right to independence. There, we would be stronger outside the EU; here, we will be rich and happy outside of Spain.

We are continuing to tell ourselves lies about what will happen day after. On that front we can count on the support, there, of a sensationalist press that disdains facts; here, on several public media outlets controlled by the Generalitat. The result? Making us believe, there, in the myth that the UK could continue to be a member of the single market, but without being subject to the regulations from Brussels. Here, that Catalonia will still be a member of the EU after a unilateral split from Spain. The lie over there: that no one should worry, European citizens would be treated equally after leaving. The lie over here: no one will lose their nationality or their rights.

Now we are forcing experts out of the debate. So we do not have to listen to what they say: there, that the departure of the UK cannot be completed within two years without creating huge damage; or, here, that a non-agreed split by Catalonia will bring enormous economic costs.

And now, let’s substitute citizens with ‘the people’ and idolise direct democracy and referendums. Let’s compare an irreversible vote without minimum voter participation requirements with the freedom to do and undo that periodic elections allow for. The result: we will split in two.

Let’s not compare Catalonia with Scotland, but with Brexit. With one difference. In the case of Brexit, Cameron was stupid enough to organise a vote thinking that reason would triumph over emotion. Here, for sure, the majority of Catalans will not let themselves be taken in by such a makeshift Brexit-style project.