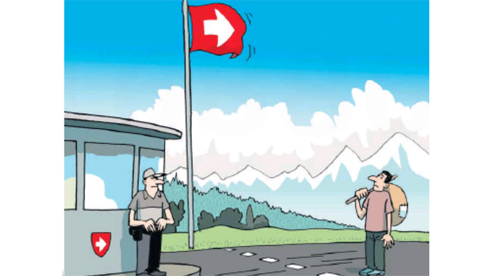 The Swiss pull up the drawbridge

The June 9 vote in favour of tightened up asylum laws is the first in a series of referendums on the welcome that the Swiss offer foreigners. The Confederation, which was once open to immigrants, may under pressure from the crisis, redefine its identity and isolate itself.

It’s seven o'clock in the morning on a Thursday on the train that runs between Zurich, the Swiss financial centre, and Bern, the capital, and there is not a single seat available in the first-class carriages. In almost any country, this would merely be a full train – nothing more that that. Not in Switzerland. On this island of European prosperity, the trains and the traffic jams on some roads have become clear signs for many Swiss that something isn’t working, and that the welfare state is straining to pay the bills.

In the end, the country is just too small to take in everyone, they feel, and so it’s time to bring some order to the borders. This talk isn’t just heard on the street; it’s reached government offices too, in an echo of the political agenda that the extreme right has been trumpeting for years.

Yesterday a vast majority (79 per cent) of Swiss voted yes to a referendum backing a tightening of the country’s asylum law. Traditionally Switzerland has been a very generous country, compared with the countries of the EU, when it comes to accepting political refugees. The referendum held yesterday is only one step in a range of initiatives with which the political class is trying to respond to the growing public anxiety.

The measure that was most hoped for, and which has angered Brussels, has been the activation of the so-called safeguard clause, by which Switzerland has restricted long-term permits for workers from the European Union, including Spaniards. In the next 18 months, up to three referendums will decide on the entry of foreigners into the country and will help redefine the identity of a country in which immigrants (23 per cent of the population, most of them European, and mostly Germans) have historically been the engine of the economy.

The safeguard clause has been more a symbolic measure than anything else. It will affect about 3,000 workers from the EU, who in any case may request a short-term permit until the restriction expires next year. As recognised by the governments themselves, it was a measure to mollify the population and show that the governments are capable of taking decisions to control the entrance and exit of workers, even it that goes against Brussels.

The financial troubles of the EU countries have greatly helped exacerbate fears. The storm powerfull raging over the rest of Europe has bypassed Switzerland, where the economy is doing well: the growth forecast is 1.2 per cent, unemployment is almost neglible – around 3 per cent – and the exercise of their particular direct democracy still guarantees them an enviable political stability. Swiss society is afraid that hordes of foreign workers will come and spoil the party.

Foreign languages are heard all over the major Swiss cities, Spanish among them. Juan Crevillén is a young architect who has been working in a studio in Zurich for the past two years. He earns about €3,000 per month net, but warns those who may be thinking of emigrating that the cost of living is much higher in Switzerland.

Swiss employers do not want any restrictions on entry. For them, the more competition, the better. Thomas Daum, Director of the Confederation of Swiss Employers, argues that 2014 will be a key year that will see the Swiss redefine their identity through the referendums. Daum believes that the worst is still ahead and that the activation of the safeguard clause has been a minor evil. "It will only last a year.

The big question is what will happen in the coming months, in the upcoming votes against immigration. Our labour market is small, and it’s not enough to run our economy,” Daum believes. The big pharmaceutical companies, banking, machinery production for export – the mainstays of the economy – would simply not work without workers from abroad.

Triumph of the right

The major arguments aired by those who want restrictions on the entry of foreigners are taken apart at a single stroke. Trains are not full because there are more people, but partly because the service has gotten better and more people want to ride them. The argument that the presence of foreigners will lead to social dumping, ie a fall in wages, is something employers deny and that unions feel that, if it is to happen, should be settled with more inspections and respect for the law.

And that there is more crime – the Swiss no longer leave the doors to their homes open, like they did before – is possible. It turns out, however, that it is in the rural areas, where there are hardly any robberies or attacks, that the talk about dangerous foreigners is most to be heard, showing once again the power of perception in the face of the reality.

It is precisely away from the cities where the extreme right-wing populism triumphs; it has become the dominant force in Parliament and probably the main party responsible for the immigration debate sharing top billing on the policy agenda in Switzerland along with the end of banking secrecy.

It is true, however, that the Swiss population has increased by several tens of thousands of people each year in a country of just 8 million inhabitants, and that some of the infrastructure has not been able to cope with the size of the population. "There has been significant population growth in the economic lungs of the country, which for example has not been accompanied by a real estate policy, and the prices of the apartments have gone up.

That is also blamed on foreigners", says Cesla Amarelle, Professor of Migration Law of the University of Neuchâtel and socialist parliamentarian. On the train back to Zurich there are free seats in the carriages. The rush hour is over.

The Swiss voted overwhelmingly for a toughening up

"A battle lost in advance" is how Le Temps introduces the subject of a hardening of the asylum law, which was put to a referendum on June 9 at the initiative of the Greens. With a vote of 79 per cent in favour, the Swiss have approved "the seven measures in question, declared urgent by Parliament and which came into force in late September," explains the Geneva daily, which outlines the main points –

Le Temps notes that while the left "was partly disunited in the fight," the party of the nationalist right, UDC –

believes that this massive yes ‘demonstrates the concern of the Swiss population over the abuse of the asylum law’.