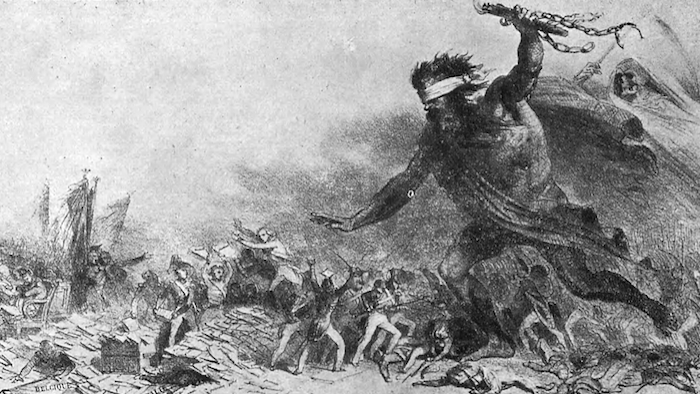 The threats hanging over Europe

A 19th-century French cartoon imagining a Russian invasion of Europe.

“Twenty-five years after the end of the Cold War, Europe faces a wide range of new threats,” writes Le Monde. Along with “the destabilisation of Ukraine”, the daily cites cybersecurity and terrorism from the Middle East, claiming that the 7 and 9 January killings in Paris —

showed the brutal modern face of this threat. Islamist terrorism plays with borders, recruiting at the hears of European societies. It does not seek to control territories, but populations.
The situation is ambiguous, because “the distinction between war and peace is fading.” According to Le Monde, European member states do not want to “sacrifice sovereignty when it comes to defence and security”, resulting in what the European Council on Foreign Relations calls a “a lack of common objectives and shared ambitions” at the European level.
Also clear, writes Le Monde, is EU’s emphasis on “soft power” at the expense of militarisation —
The trend is perfectly clear: Europe is spending less and less on security, while Asia and Russia, notably, are investing more and more. Defence expenses went down 2.4 per cent in Central and Western Europe [from 2012 to 2013] and 7.8 per cent in the United States, while in Russia, they increased 4.8 per cent.
Le Monde notes that the EU foreign policy played “a key role in the negotiations over Iran’s nuclear program and in the Balkans”, and cites “the collaboration between secret services” as a “positive example” of cooperation.
The paper nonetheless sends Europe a warning with a quote from the most recent work by Henry Kissinger: “In foreign policy [the EU] embraces universal ideals without the means to enforce them, and cosmopolitan identity in contention with national loyalties.”