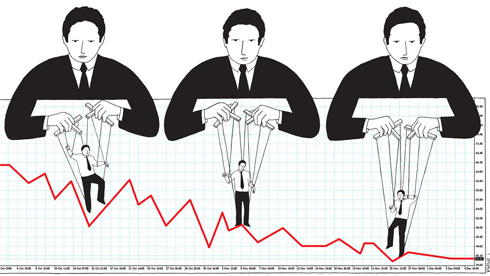 The troika saves us from ourselves

The International Monetary Fund, European Commission and European Central Bank are back in Lisbon to evaluate the results of the 2011 bailout plan. This is good because otherwise Portugal would make the same mistakes that led to the crisis in the first place.

I have to admit, I fear the day the troika will stop landing on Lisbon to verify our accounts, to remind us of our commitments and to sign cheques. This fear grips me a little tighter each time I read what is promised on campaign posters by candidates for local elections [held on September 29]: free school text books; free medication; free retirement homes; free vaccinations, etc… There is a sort of madness for free things "right now" which culminated with a martial arts school’s promise (free, that goes without saying) to combat crime in a northern town [Vila Nova de Gaia] and, in the south, with an equally fallacious guarantee of local programmes to fight unemployment.

Knowing that the local authorities will neither cut their expenses or their complex bureaucracies, these programs will never turn into reality. Or worse still, they will result in additional new jobs in these bureaucracies themselves or municipal enterprises – a practice which led to the need for an emergency appeal for help from the troika in 2011.

Because local authorities have abandoned neither their reckless spending habits nor their complex bureaucracies, neither these programmes will never see the light of day.

Fear grips me even tighter when I hear [Socialist Party leader] António José Seguro say that he will not accept further budget cuts but fails to explain that this is not possible without raising taxes even higher, and when I realise at what point the PSD [Social Democrat Party] and the CDS [Christian democrats] are impatient to be free of the tyranny of external control in order to immediately freely pursue new promises of things that are "free, right now".

[[I was born in Portugal in the 1960s. This is the third time I find myself in a country under external assistance and that is why I think my generation is especially thankful to the creditors who, in 1977, in 1983 and in 2011, were ready to place their money here]]. What sensible person would have wanted to raise a family in Portugal without this outside help? Of course, we paid interest, but much less than if we had not been this protectorate so abhorred by [Deputy Prime Minister] Paulo Portas or if our political leaders had to trawl the world seeking those who would lend us the most money.

I fear the day when Portugal will, in effect, cease to be a protectorate and when these political leaders return to brandish the verbs "give" and "invest" (if they want to invest so much, why do they not do it with their own funds and start a business?) in the great mystification they call a "positive discourse" on the nation. There are things that, when you live them over and over again, become grotesque.

For it is more than certain that someone will soon appear, as [did former PM José Sócrates] in 2009, to lead Portugal in a madcap rush forward – presented as a proactive and innovative approach. One can count on the vested interests who defend their personal privileges and those of their businesses, to claim that the country can no longer stand austerity when this austerity is imposed, not by creditors, but by the ruin into which we have plummeted in our effort to protect the corporations, the state as a partner of the private sector, and rights, acquired on paper, which public finances are no longer capable of ensuring.

Finally, there will be the losers and their speeches about the great men of the past, about the great policies of bygone days, in times when there were leaders who, due to their greatness, their wisdom and their noble principles, led us three consecutive times to poverty in just 35 years, yet still prefer, while failing to see the influx of funds they provide, to blame the creditors rather than themselves.

After three outside interventions, I am sure not only that the troika will be back, but also that it will find Portugal in much worse shape. In effect, each time we become a protectorate; rather than questioning our inability to govern ourselves we favour this irrepressible urge to repeat all the errors that made us beggars to begin with.

That is why, if I live as long as the statistics say I will, there is no doubt I will see more troikas landing in Lisbon. And that the times in between will see the flowering of all sorts of demagoguery.