Opinion, ideas, initiatives Nominations for the ECB
A meeting at the ECB board in Frankfurt in December 2017. 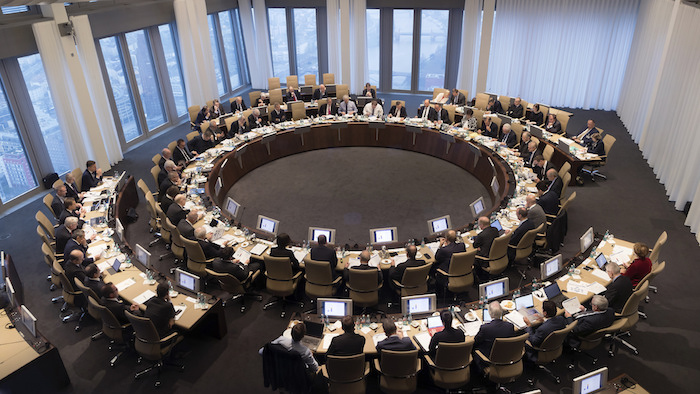 In this appeal some prominent academics, including Ulrike Guérot and Thomas Piketty, demand that the nominations for the Frankfurt institution be conducted publicly, rather than behind closed doors, as has been the norm so far.

ECB/Flickr  | A meeting at the ECB board in Frankfurt in December 2017.

While our eyes are glued to the interminable vicissitudes of the German Groko, a no less important story is playing out in Brussels, but has so far met with indifference. On January 22nd and February 19th, Eurogroup finance ministers will hold private meetings that will mark the beginning of a profound renewal of the European Central Bank executive board. The first big change will be the planned replacement of current Vice-President, Vitor Constancio. In the next two years, no less than 4 of the 6 members of the executive body of the ECB, Mario Draghi included, will be replaced.

All signs indicate that the future of economic, fiscal and monetary policy in eurozone countries is at stake in this series of nominations. The ECB of 2018, after all, barely resembles that earlier organisation which spent its relatively quieter days at the periphery of European policy, protected by its independent status. Built by governments and financial markets as an institutional recourse, the ECB started wielding more power thanks to the 2008 economic and financial crisis. Whether it’s telling member states how to finance their market debts, suggesting the adoption of a budgetary treaty (Fiscal Compact), notifying Irish or Italian heads of state that they should undertake without delay a raft of onerous reforms, or directly intervening in negotiations on the Greek crisis by controlling access to liquidities, it is always as a veritable co-ruler of the eurozone that the ECB operates.

After a decade of crisis, the ECB is no longer the same institution that was drawn up by the Treaties and consecrated to the sacro-saint goal of price stability: it has established itself, estimates at the ready, as Chief Economist of the eurozone; it has acquired executive power via the troika (with the European Commission and the IMF), which defines and ensures the execution of memoranda in countries being “helped”; it plays a central role in eurozone and Eurogroup summits which coordinate national economies; it has become a regulator of the banking world, deciding on the life and death of the largest banks in the eurozone; it has established itself as a reformer, working with coalitions built on prioritising “structural reforms” (labour markets), “competitiveness” (restrictive salary policies), etc.; it speaks on equal terms with the four other “presidents” of the Union (of the Commission, the Council, Eurogroup, and, finally, the European Parliament) when it comes to designing the political and institutional future of eurozone government, etc.

And yet, it as if the coming nominations are just another technicality. While there is in fact a rare occasion for leading parties and actors of representative politics to make their weight felt on the crucial issue of eurozone governance, everything seems set to keep nominations behind closed doors. Finance ministers are wary of having their decisions in Brussels held to account by their national parliaments; Eurogroup, an institution barely recognised by European treaties but which in fact plays a decisive role in the matter, has no form of political control. As is often the case, the European Parliament, which will hold a hearing for the chosen candidate, will arrive after the dust has settled, after negotiations have been concluded and compromises have been accepted, to give its… consultative opinion.

Meanwhile, there’s no lack of questions concerning the future of ECB policies and the role it should play: what position should it take in the reform of eurozone governance? What will its commitments be with regard to the European Parliament? What will become of its monetary policy when inflation has disappeared? What support can to bring to the Union’s policies? What are its priorities for the next eight years in terms of banking regulations? What place will be given to social partners? What form of policy will there be against conflicts of interest for the banking regulator? What redistributive effects can we expect from ECB policies? No doubt, the responses to these questions will determine the future course of the government of the eurozone. Candidates need to be questioned, and their responses should be known and debated.

Financial markets and governments seem satisfied with the current situation, happy to throw a veil of ignorance over the nomination process. And the signals coming from Brussels are hardly reassuring, leading us to suspect that Spain, imagining that its time has come, will propose it’s current minister for the economy, Luis de Guindos, for the vice-presidency on January 22nd. One of de Guindos’s main claims to fame is having been the executive president for Spain and Portugal’s branch of the Lehman Brothers during the peak of the financial crisis...

In the absence of the eurozone parliamentary assembly called for in the treaty for the democratisation of the eurozone (T-dem), of which one function would be precisely the political supervision of ECB nominations, there is still nothing preventing finance ministers from making public the criteria which justify their preferences for this or that candidate, and the conditions they want to impose on them.

The nomination process does not have to be conducted in private. It doesn’t have to be yet another game of European musical chairs. Nothing, in effect, is stopping finance ministers from making their decisions, and the reasons behind those decisions, public. Nothing is stopping candidates, those for the presidency most of all, from stepping forward in the coming months, being heard by national representatives, and stating their commitments.

And nothing, finally, is stopping the European Parliament from making its participation in the nomination process conditional on its own basic political requirements. This is how European parties, unions and NGOs can cut a path and begin weighing in on the decisions which will decide economic, fiscal and monetary policies within the eurozone. This would be the first real step – however modest – towards the democratisation of Europe.