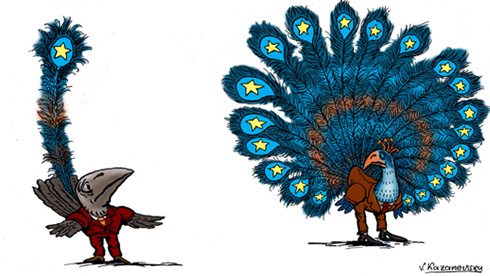 ‘This crisis will be followed by a European Renaissance’

In the second part of his speech at a recent conference organised by Trouw, the Dutch writer Geert Mak says that the political and institutional crisis in Europe will trigger the emergence of a new balance in the relationships between European institutions themselves, and the EU and its citizens.

More than 130 years ago, on March 11, 1882, the French philosopher and polemist Ernest Renan gave a speech at the Sorbonne that was to have a long lasting impact. It was entitled, Qu’est-ce qu’une nation?, or “What is a nation?”. “A nation is […] a great solidarity constituted by the feeling of sacrifices made and those that one is still disposed to make”.

There are still European philosophers and politicians, especially in Brussels, who would prefer to brush away the nation state as an obsolete and even dangerous 19th Century myth. They see the crisis as a means to now finally making a great leap forwards; they still dream of a European federation. If you apply Renan’s clear account to our continent, however, then – even half a century later after laying the foundations of the EU - there is still little to be seen of such a European nation. If anything has been damaged by the crisis and the subsequent extreme austerity drive, then it is that very solidarity and willingness to continue a common life that Renan stressed.

That is not all, though. [[The problem with all those great European dreams is that in rejecting the nation state, the importance of the “place” factor is also generally disregarded]]. The semi-illegal unpasteurised cheeses at the market in Dieppe, the smoky café without any toilets in the Hungarian village of Vasarosbec, Bruges’ chocolate, the solar panels in Neukirch, the metro construction in Amsterdam… what has not been suffocated in the hailstorm of well-intended regulations from Brussels?

They are, each and every one, symptoms of a European federation that has got completely out of balance in recent decades. Too many issues that a normal federative bond, such as the United States of America, leave to member states – cheese and chocolate, for example – are governed from Brussels. On the other hand, in Europe, too many policy areas that are more or less centrally managed in all federations - such as the financial sector, foreign policy and defence – are still managed by the national capitals. European citizens feel that very keenly. If anything undermines support for the European Union, apart from the lack of democracy, then it is this.

Introduction of a European senate

Should we restore the nation state to its full glory, as some are arguing? Do we then, as Europeans, have to mutually manage, without the EU, a thousand and one affairs varying from fishing quotas to financial agreements and the energy policy? Not to mention the climate issues that have rapidly descended upon us in the 21st Century. Has the world itself not long outgrown national bonds?

[[Whether we like it or not, we have to find specific, democratically-controlled forms of that omnipresent European “space”]]. It will be difficult and fraught with problems, but there is no way we can go back to 1956.

Where the nation state could acquire a new place is within European democracy. You can therefore justifiably plead for the introduction of a European senate, which, as in the US, reinforces that national element within the European Parliament and European democracy. At least as important is the change in the national ideal from the 19th Century “blood, language and soil ideal” to the more political ideal, as the Americans have. That process is now in full swing in Europe, too.

This crisis will be followed by a European Renaissance. Of one form or another. From the sorely tried European Union, we will have to recover a European space in which every European feels, in some way, at home. Driven less by dreams and idealism, I fear, and more by bitter necessity. Not triumphant, but realistic and modest.

First and foremost by taking far more account in European regulations and institutions of the values associated with the concept of “place”. By respecting, fostering and, where possible, protecting all that goes along with those values against the already too-massive European and global aggression.

That space also has to be created within the political debate, if only by not simply dismissing all those who no longer feel at home in their own spot in the world as populists or nationalists. These are, indeed, feelings that are always exploited by the ultra-right. But that has everything to do with the fact that progressive, and liberal-conservative movements have systematically paid far too little heed to the human need for a home, a place and everything that goes along with that.

Secondly, that balance can be restored by devoting far more attention to what local elements can contribute to Europe. Everywhere, but especially in the south, we are seeing how, driven by necessity, parallel economies are springing up, based on local knowledge and products, local networks – that is to say, without any distributive trade – local credit extension, local confidence.

It is currently, for example, primarily the cities where creativity and innovation are flourishing, despite all the pessimism, where migrants come and go, where town councils are breaking down national barriers and reaching out to one another, all over the world. We have been in the midst of a lengthy, difficult process, since before the crisis and since its advent. By trial and error, we are heading towards a Europe made up of people, rather than a Europe made up of states.