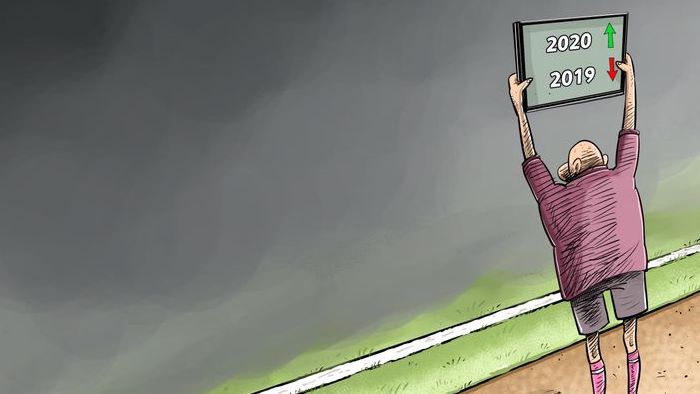 In many respects, in Europe and across the world, 2020 has gotten off to a bad start — just as 2019 proved a bad ending to a decade which will be noted for its environmental catastrophes. The ice is melting at accelerated speed, flood and drought are hitting harder than ever, December’s COP25 in Madrid was a failure, uncontrollable forest fires are ravaging south-eastern Australia, bringing untold devastation to unique wildlife: quite literally, the planet is drowning, or roasting, depending on where you look.

Yet we also know: the coming decade, and the year 2020 in particular, will have to be a time of radical choices when it comes to environmental policy. The clock is ticking, as we’re so often reminded by the Intergovernmental Panel on Climate Change. Meanwhile, global CO2 emissions have never stopped rising, despite the commitments undertaken by the 183 signatory states of the 2015 Paris agreement. At COP26, set to take place next November in Glasgow, governments will have to propose new action plans to limit the impact of global warming — while so little time remains.

The European Green Deal, presented on 11 December by the President of the European Commission, Ursula von der Leyen, shows new ambition. Is it capable of making Europe the first carbon neutral continent? How will this Deal, finally setting in stone Europe’s recognition of the climate emergency, produce a “just and socially fair” transition, one which will supposedly orient all of European policy? How will the influence of industrial lobbies in Brussels be held in check? As for the member states, whose attitudes towards climate change are hardly homogeneous — can they conform, unflinchingly, to the tendency now promoted by Brussels, which breaks with the earlier language of laissez-faire?

So many questions we need to ask ourselves, while acknowledging the radical paradigm shift the Deal represents, of which no-one has managed to grasp all the consequences. After the green wave in the last European elections, with particularly strong support from young Europeans, let’s bet on this proposal proving a genuine turning point, marking the beginning of a new era, and let’s make sure it doesn’t just remain on paper.

We thank our readers for all of their support and wish them an excellent 2020, under the banner of safeguarding the planet, a commitment we pledge ourselves to as a media outlet. This transition will never happen without a powerful mobilisation of citizens, a European public opinion which comes through loud and clear, and which we’re helping to forge.

In the coming weeks, in order to get closer to the concerns of Europeans, we’re going to make it possible for our community to become more involved in VoxEurop. Other surprises will be revealed over the course of the year.