Report Refugee quotas across the EU 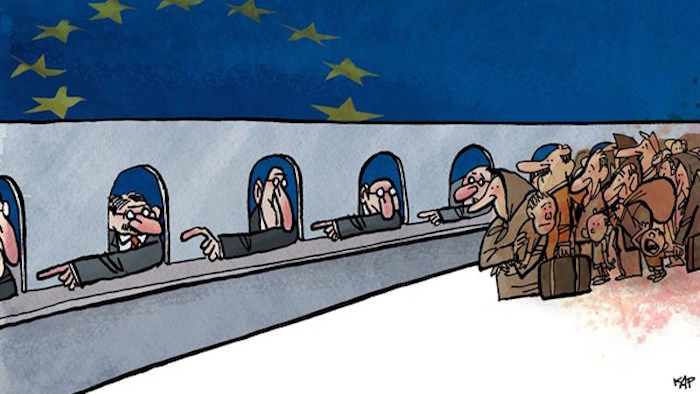 Report Refugee quotas across the EU

Towards a fairer distribution of asylum seekers

The European Commission’s distribution key for refugees across the EU is wanting in many respects. Two LSE researchers defend an alternative key based on pragmatic and realistic criteria. The outcome is sometimes surprising.

The European Commission has worked out a distribution key, described in a press release of 9 September 2015, to spread the responsibility for receiving refugees (or, more accurately, migrants who claim to be in need of international protection from sending countries that have refugee recognition rates in the EU greater than 75 per cent—currently Syria, Eritrea and Iraq).

The key stipulates quotas that are proportional to a measure consisting of population size (40%) and GDP (40%), plus two "corrective factors": unemployment rate (10%), and the number of refugees received in the last four years (10%). In the Council decision of 22 September 2015, the key is applied to roughly 66,000 refugees who are held up in Greece and Italy to be distributed between the remaining states in the European Union, except for Denmark, Ireland and the UK, who are exempt on grounds of the Lisbon Treaty. The Commission’s quotas can be found in column J of Table 2.

The Commission brings in population size at the wrong point in the calculation. It notices that various factors matter, including population size, and it assigns weights to these factors to determine what would be a reasonable willingness to absorb refugees for each state. What it overlooks is that population size matters in a very different way from the other factors.
First we determine what would constitute a reasonable willingness to absorb refugees for a typical citizen of each state. We propose that the following three factors are relevant.

A reasonable measure of riches is GDP per capita at Purchasing Power Parity since the cost of receiving refugees will be affected by the cost of living in the receiving member state. See Column B of Table 1.

A simple measure of the extent to which the population is ageing is the proportion of over 65 year olds in the population of each state. See column D of Table 1.
Unlike the European Commission, we did not include the number of applicants received in the last four years in our measure. We grant that states that have opened their doors in the past should be given a break. But on the other hand, economies of scale enter in.

States who have opened their doors in the past already have institutions for reception in place whereas it is costly to set up such institutions for states who only had minimal numbers of refugees knocking on their doors. Given that these considerations pulls in both directions we decided not to include this factor. In any case, the factor only has small weight in the Commission’s calculation.

We then construct a multi-dimensional measure. For each factor, we construct an index between 0 and 1 that is a linear function of the values of the factor, so that the highest value on each factor maps onto 1 and the lowest value maps onto 0. This normalises the data. See columns B, C and D of Table 2. Subsequently a decision needs to be made about weights. In the absence of any principled argument that one variable should have more weight than another, we propose to work with equal weights, but this can easily be adjusted. We now have a measure for the reasonable absorption willingness per capita for each state. See column E of Table 2.

Let us focus on the member states who are substantially affected, say whose quotas increase with more than 20 per cent (in yellow) or decrease with more than 20 per cent (in blue). To understand these comparisons, note that on our scheme, GDP per capita is slightly less important, but job vacancies and an ageing population have come in as equally important co-determining factors.

There are various changes one could make to our key. One could take into account other factors to determine the willingness to absorb per capita. One might take out outliers in calculating the indices (e.g. Luxembourg on GDP per capita). One might want to change the weights of the factors. Or one might want to use a progressive rather than a proportional assignment of refugees relative to the willingness to absorb. We invite our readers to do so and have made our Excel file available for this purpose.