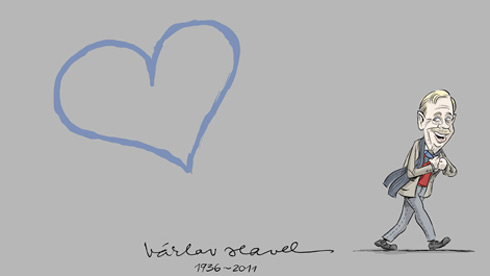 Vaclav Havel, an icon under fire

A year after the death of the former president, his political outlook on civil society is being challenged by his successor, Václav Klaus. But for weekly news magazine Respekt, these attacks underscore why Havel's legacy will always remain a battleground.

It's been a year since Vaclav Havel died, and his sudden departure raised the question of what Czech society's future would look like without him. It is still too early to answer that question, but his moral authority has now come under sustained attack. It is thanks to these recent assaults, that we are reminded just why Havel is so important to us.

In recent weeks President Vaclav Klaus has made two statements attacking Vaclav Havel and his legacy. During a meeting with Slovak President Ivan Gašparovič, Klaus said that the division of Czechoslovakia had benefitted Slovakia much more than the Czech Republic: “In Slovakia, politics had always been whole. The attacks of the so-called "non-political politicians" damaged the Czech Republic infinitely more,” and triggered the development of a culture without "any respect for authority.”

It's good to hear that politicians who want to rule authoritatively do not have an easy go of it in the Czech Republic. And for that we need to thank Vaclav Havel, whom Klaus has traditionally described as the founder of “non-political politics” (civil society).

The second attack came through Klaus’s support of a book by his longtime secretary Peter Hajek. Hajek this time focuses on examining the activities of the Anti-Christ among us, writing that Havel was “an active tool of the forces of lies and hatred,” and that “he succeeded in his mission.”

Klaus said that, in essence, he shares “the author's criticism of the historical role played by Vaclav Havel” and considers the book “almost compulsory reading for everyone.”

A year is a long time in politics

Klaus himself delivered a tribute over Havel’s coffin describing Havel as a “great figure in our modern history" who earned our “freedom and prosperity, both material and spiritual.” So what has changed during this past year?

If someone listening to Klaus’s funeral tribute to Havel thought it was a grown-up manifestation of reconciliation and recognition of merit, they would have been mistaken. It was pure politics.

Put simply, President Klaus could not have said anything else. If he had, the mourning public would have turned against him. But now we’re one year down the road, and all of a sudden Klaus has discovered that the first Czech president was practically an enemy of democracy.

Václav Klaus knows very well that the battle for the shape of the domestic political system never ends. He who wants to succeed must constantly shore up his position, weaken his opponents and rally his followers.

Czechoslovakia was created in 1918 by events on the international scene. It regained its independence in 1989 in a similar way.

You could almost say that independence was almost handed down to us from on high. That’s because we lack the equivalent of the United States’ Founding Fathers.

In Czech history, the closest we have are the first Czechoslovak president, Tomas G. Masaryk and our first post-revolution president, Vaclav Havel. Their approach to freedom, democracy, open society, taking responsibility for the weaker members of society, the need to find allies at home and abroad, may serve as an underlying tenet of the state.

What’s more, they pushed ahead with their ideas when they were at the margins of society and when they were heading the state. This gives them both strength and conviction.

The Nazis and communists were very well aware of this, and for that reason did their utmost to disgrace Masaryk and Havel. In the 1950s, accounts very similar to the one Secretary Hajek wrote about Havel were published about Masaryk.

It was also claimed that Masaryk served the forces of evil. The motivation was clear: the representative of a pluralist, open democracy is dangerous, because he tells people not to believe in Messiahs, but to trust in themselves. Take an interest in politics and keep a close eye on everyone who is in power, because politicians should not control you; they should serve you.

Vaclav Klaus has a different idea of how the state should work. The basic parameters of a democratic system should remain, but the decisive say has to be left to a small circle of people who are to be left to govern undisturbed. Society is then kept in a state of tension and uncertainty by a constant search for enemies and by stirring up disputes – followed by assertions that only that small circle can provide certainty in a turbulent world.

When Klaus said that civil society did not undermine authority in Slovakia, he was wrong.

No doubt he was thinking about how, when he had been bombarded with tough questions from the media, intellectuals and the general public, nobody interfered with Prime Minister Vladimir Meciar’s leadership.

But we’ve seen very clearly what that way of running a country looks like. Intimidating opponents, restricting freedom of speech, having people dragged off by the secret services and sanctioning state murder of inconvenient witnesses – that’s no more than a mafia state on a grand scale.

That such a thing never happened in the Czech Republic is perhaps the greatest achievement of the post-November development, and not a failure.

It is no coincidence that Vaclav Klaus and his close associates are launching a frontal assault on the legacy of Vaclav Havel right at this moment.

The election of the next head of the Czech state will be held in a few weeks, and in March Vaclav Klaus will finally vacate the castle. This will reduce his influence. That is why he has to prepare a position, call in all those close to him, and search for a strategy to retain influence.