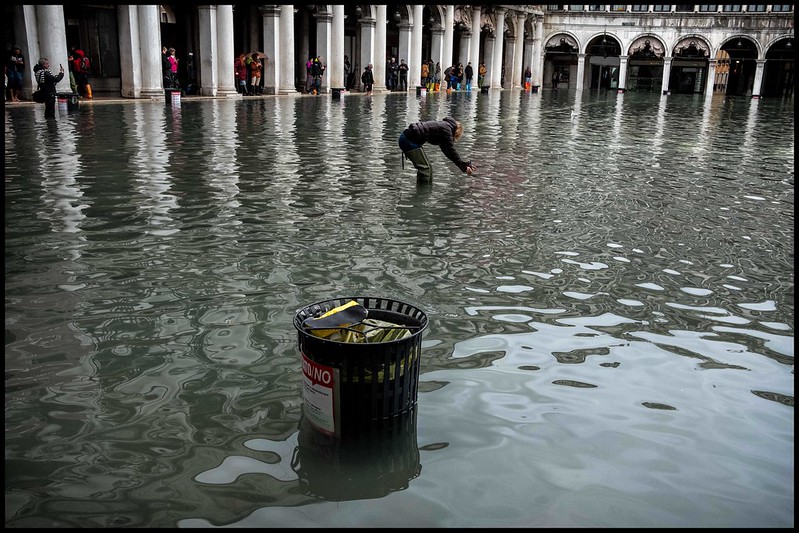 Every year, more than 20 million tourists visit Venice. But due to climate change and the rise of sea-waters, the city could disappear from the radar, if strong CO2 emission reduction policies are not urgently implemented at the European level.

On the 11th of November 2019, the city of Venice experienced one of the most significant rises of sea-waters in its millennial history. The sea rose by 1.87 meters, a level which broke every record on track since 1966.

In Italian language, the phenomenon is called acqua alta, literally: “high waters”. The data provided by the city shows a strong increase in the number of this type of extreme weather phenomenon. Over the past decades, the municipality counted hundreds of cases each decade, compared to only 30 between 1950 and 1960.

Venice – also called the City of the Doges (in the past, the title “Doge” was associated to the senior-most elected official of Venice) – is one of the most renown heritages of Italian history and, beyond that, of UNESCO. The city is composed of hundreds of small islands connected through bridges.

The phenomenon might look local, but it is not. It is linked to a global trend: the general rise of the level of sea-waters and oceans. What’s the trigger? Climate change.

In the words of Yann Wehrling, French Ambassador for the Environment, Ministry of Europe and Foreign Affairs: “People don’t understand what climate change means: acceleration of climate change, urbanisation, coastal areas at risk, impact on biodiversity. We have to give more space to citizens in decision making. The planet doesn’t need us, but we need the planet to survive”.

Sea level rise is the title of a report published in March 2020 by the Institute of European Democrats (IED), a think tank which benefits from a funding line of the European Parliament.

The study identifies the chain of causes and effects that leads to the acqua alta: the rise of the global temperature triggers the melting of glaciers and Antarctic ice caps which do not reform in Wintertime. In turn this provokes the rise of sea-level waters.

Today, this process unfolds already three-times faster than in 2007.

The consequences of the rise of sea-water levels are disastrous, not only for Venice. In Europe, for example, some 23 airports are located near sea-waters. Just like many entire cities, not to speak about The Netherlands as a whole.

The solutions at hand

In the context of European governance, the solutions to problems such as those experienced by the city of Venice, need to abide by the principles of subsidiarity. Oftentimes, local authorities have a better understanding of the best strategies of action.

In Venice, the municipality kicked off an infrastructural project back in 2003 with the aim of pushing back the risk of inundations. The gigantic project, which was finalised this year, goes under the name of MOSE.

MOSE is a water barrier composed of 78 dikes in a line along with the lagoon. The infrastructure is capable of blocking a sea-level rise between 1.10 and 3 meters of height.

The European Commission co-financed MOSE. Nevertheless, the project has been at the centre of heated debates due to its high costs and its only relative efficacy. On top, some instances of corruption have spoiled a lean development.

Other than that, Europe plays an important role also thanks to the research activities brought on in the context of Copernicus, the European Union's Earth Observation Programme.

According to Antonio Navarra, president of the CMCC (Euro-Mediterranean Centre on Climate Change), Copernicus’ forecasts have played a role also in the case of the exceptional acqua alta of November 2019: “The forecast started three days before and pointed at an rise up to 1.50 meters, short of the 1.80 meters that were effectively observed. But three days ahead, the model was capable of giving us a warning that something really exceptional was going to happen. We have the tools, we have the science, we have the talent to actually be able to set up these systems that will allow us to moderate the worst effects of climate change”.

Although scientific studies are the main tool to anticipate extreme weather conditions, it is paramount to develop long-term solutions to keep the rise of sea-waters at bay. This can only be done through a European action aimed at limiting CO2 emissions across the Old Continent.

In 2019, the European Commission announced a Green Deal. More recently it has underscored a set of more specific objectives: lowering CO2 emissions by 55% before 2030 as to subsequently reach climate neutrality in 2050. Now it is time to deliver on promises.