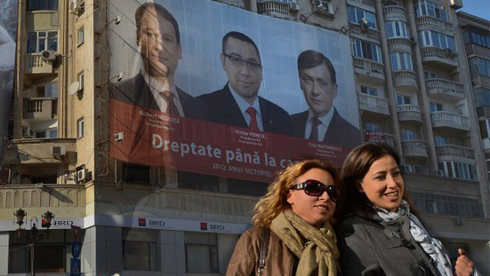 Voting for prosperity or politics?

In the wake of a year long political crisis prompted by the dispute between President Traian Băsescu and Prime Minister Victor Ponta, Romanians are about to go to the polls to elect both houses of the country’s parliament on December 9. Given the current context, it is difficult to see how there can be a real debate about the state of society.

A poster from the Social-Liberal Union in Bucharest.

I would argue that the stakes in this election were neatly summarised by Prime Minister Victor Ponta [of the centre-left Social Liberal Union], when he let slip, during a campaign visit to a remote corner of Romania, that if we had been told that we would have the DNA [National Anti-corruption Directorate] and the ANI [National Integrity Agency], and not just money in our pockets, we would probably have thought twice about joining the EU.

It reminds me of a woman who had given birth to a Down’s syndrome baby, whom I saw interviewed on a Belgian TV news programme. She said that if she had known, she would have terminated the pregnancy, because "the health of the child is the first priority."

Setting aside the absurdity of the situation, I believe that in political terms thePrime Minister is quite right. The EU was very good for Romania and Romanians even before accession. However, people have become accustomed to the benefits of being in the EU, which they take for granted to the point where they do not even notice them any more. They are only aware of the knocks they have received.

If you take a close look at the two themes, which, in the course of this flaccid and doctored campaign, we have been told are uppermost in the in the minds of voters. In 2012, monthly household incomes, calculated in lei [the national currency], were 73 per cent higher than they were in 2006, the last year of strong economic growth, before accession and the crisis. In other words, Romanians are much better off than they were. But does anyone pay any attention to that?

Voters do not reason in terms of facts, and ask themselves how they would be living if we had not joined the EU, nor do they make long-term objective calculations. No, when the common man votes, he is focused on subjective expectations, and a utopian view of the 2006-2007 period, when it seemed that everything — salaries, land prices, jobs — was going to increase by 30 per cent, per year indefinitely.

This subjective deprivation is what shapes electoral behaviour, and not only in Romania. There is no point in asking people to read the European Commission’s excellent analyses of the "costs of non-accession", or advising them to make a field trip to Moldova.

The other question that people, at least in theory, are concerned about is corruption: the way "they" steal from us, whoever “they” might be.

As it stands, it appears that there will be no reward for those who after 2005-2006, and for the first time in the 150-year history of modern Romania, made it possible for high ranking civil servants to be charged and sentenced for corruption. This groundbreaking initiative came about because of pressure from the EU, and it would be reasonable to expect people to count this as a "benefit".

The battle against corruption was never going to be a walkover, which brings us to one of the critical issues in this election: there are many people who are threatened by the prospect of a reinforcement of the rule of law backed by Europe, and they are not about to loosen their grip on the country without a fight.

They are in the majority in the political class, even if they are divided between more moderate and more radical factions.

In recent months, Ponta, who has a foot in both camps, has given the impression that that he has very little control over this situation. In his bid to tell all sides what they want to hear, he has amused the gallery with some remarkable verbal contortions.

For politicians, the election will decide whether they will be once again beyond the reach of the law. However, this issue will not be the main focus for the people, who will inevitably be influenced by the wave of anti-Băsescu [President Traian Băsescu of the Democratic Liberal Party] sentiment that emerged two years ago.

After all, the president was the one who [in response to a demand from the IMF] cut their wages and their pensions. This wave will abate with time, but not in the near term. And collateral damage to the idea of Europe also appears to be one of its consequences.

Way ahead almost clear for USL

Even before the December 9 vote, the die has been cast, remarks România liberă. The daily points out that in the Social-Liberal Union Union led by outgoing Prime Minister Victor Ponta —

… are already distributing posts in the future government, preparing plans on how to deal with the President [Traian Băsescu], and making lists of future MEPs. All of the arguments indicating a victory for the Social-Liberal Union (USL) with a score of more than 50 per cent are very tedious, like the overall election campaign. The outcome of the vote can only be changed by the USL, which is doing everything it can to do just that.

The arrogance criticised by the daily could encourage voters to abstain or prove the polls wrong by giving their support to the Right Romania Alliance (ARD), which has the backing of Traian Băsescu. This is one of the reasons whyJurnalul Național, which supports Victor Ponta, has called on citizens to turn out in force —

What do we have to do? We have to overcome apathy and lethargy. We have to vote, that is all we can do. Vote as though it was for the last time. Call your friends and relatives to tell them that this is their last opportunity to stand up to the occupation, because Romania is being occupied. Vote as as if you were trying to stop the end of the world. Think of your vote as vital first aid, mouth-to-mouth resuscitation for our moribund democracy, while there is still time.