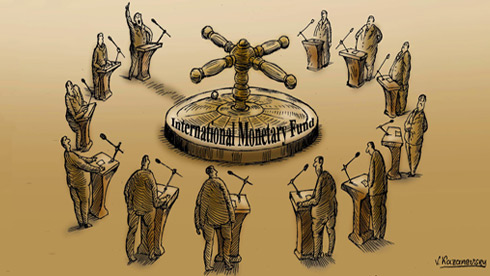 We must learn to do without the IMF

Calling on the expertise of the International Monetary Fund helped save the euro at the height of the crisis, however, the personal involvement of the head of the ECB and the creation of specific financial tools have now made recourse to the Washington-based institution unnecessary, says an economist.

The decision of Brazil and a number of other countries to withdraw their support for the IMF programme in Greece has once again reposed the question of IMF assistance to eurozone member states and whether it is really needed.

Firstly, it is important to point out that IMF intervention in the eurozone is not a matter of course. As a rule, the IMF provides support to countries struggling with a major imbalances of payments, which most often result in the flight of foreign capital, the exhaustion of central bank reserves and a depreciation of national currencies.

By loaning more reserves via a support programme that is conditional on the implementation of reforms, the IMF steps in to reassure investors and reverse outflows from countries in crisis. In the eurozone, however, the balance of payments is in equilibrium and the euro remains a strong currency, which therefore in no way justifies intervention by the IMF – which is also what led former ECB Governor Jean-Claude Trichet to indicate at the start of the crisis in 2010 that falling back on the IMF would be tantamount to declaring the eurozone a failure.

The IMF did in the end intervene in the eurozone (Greece, Ireland, Portugal and Cyprus) for three main reasons. One was simply that no plans had been drawn up to deal with the fiscal bankruptcy of a eurozone state, and the IMF was the only instrument available to come to the aid of states facing very immediate financial needs. The other reason was political: the IMF was to play its role of scapegoat, the institution that sets unpopular conditions for the aid — something that the eurozone states were not prepared to do themselves. Finally, the IMF’s expertise in putting together economic programmes in just a few weeks is indisputable, and also justified the provision of aid in such a chaotic situation.

However, over the past three years the eurozone has been put back in working order, and provided with the necessary internal financial mechanisms to ensure solidarity. The ECB has been given the power to undertake "Outright Monetary Transactions" that enable it to rapidly come to the aid of states, so justifying governor Mario Draghi’s declaration that the ECB would do “whatever it takes” to save the euro. Eurozone authorities have also created the European Solidarity Mechanism (ESM), which has taken on the role of a de facto European Monetary Fund that can make loans to the weakest member states. Finally, the most solid states, most notably Germany, are assuming the political consequences of their positions, demanding reforms while showing solidarity (through, for example, funds to help youth or SMEs).

Given all this, is it not time for the eurozone to declare that it can do without the IMF? Can the world's second reserve currency reassert its full sovereignty and show that it is capable of being fully supportive and protective towards its own members?
Not having to resort to the IMF would have two consequences. The first is financial: the disbursements of the IMF, already marginal in Greece, Portugal and Cyprus, would have to be bridged, and these funds are now available through the ESM. The second is political: the eurozone would be left to itself to deal with its weaknesses, notably the feeble convergence of economies in the south and north. This would send a strong message on behalf of the governments, which, in recent years, have wanted to demonstrate that the eurozone is not only a monetary union but also a political initiative. After a difficult passage, the eurozone could affirm that it is ready to meet its own challenges (for example, by writing off – or not writing off – part of Greece's sovereign debt, one issue on which the IMF and the eurozone still disagree).

However, before it abandons recourse to the IMF, a half-way option could be established. As it has done in some countries, the IMF could, in consultation with eurozone authorities, sign so-called precautionary arrangements with eurozone countries under its programme. These would be agreements with no financial assistance tied to them, but would come in the form of certification on the conduct of economic policy. The eurozone would thus preserve its financial autonomy, while being able to fall back on the expertise of the IMF. This would be a first step. After all, the eurozone must, in the end, assert itself politically.