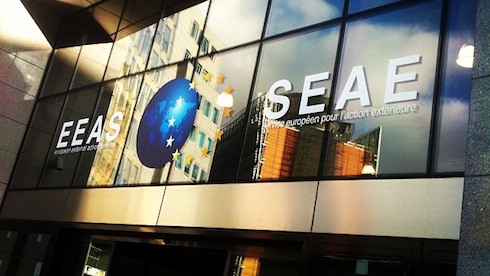 Who will get the job?

EU leaders should finally pick up the next head of the European diplomacy during this week-end’s European Council. Check out who the four frontrunners for the job are.

Radosław Sikorski, the strategic entrepreneur
Radosław Sikorski is by far one of the most experimented European leaders right now. An Oxford graduate, he has a maverick reputation and does not fear challenges.
He is rather a strategic entrepreneur than a measured diplomat and has a lot of experience: two years as Defense minister and seven as the head of Polish diplomacy. Along with Carl Bild [see below] he is one of the Eastern partnership’s architects. He believes that the future of EU’s security depends ont the capacity to relaunch the relationship with Paris and Berlin and talks about a “defense eurozone”.

Federica Mogherini, the “end of History” generation
Federica Mogherini is possibly the opposite to Sikorski. She prefers to avoid taboos and dividing issues and tend to be superficial.
Mogherini runs the Italian diplomacy only since February and, as a US presence in Europe is considered to be essential as a symbolic guarantee for stability, she said that “we should not concentrate too much on symbols”. Mogherini also said in May she would prefer that the agenda of September’s NATO summit is not “overshadowed by the crisis in Ukraine”.

Carl Bildt, the Digital Diplomat
A pioneer in digital diplomacy, the Swedis veteran politician opened one of the most read political blogs in 2007, while his Twitter account in English has more than 250,000 followers. From his point of view, digital diplomacy means being able to check quickly what is happening in the world.
A pro-European, he was accused of being too soft during the Balkan war, while many other European leaders asked for military intervention. One of his most recent initiatives has been the Eastern partnership, set up in 2009 along with Radosław Sikorski. But do the other European leaders want a charismatic actor who is not tongue-tied as a successor for Catherine Ashton, the current High representative, renowned for her discretion and for the way she has kept a low profile throughout her term.

Kristalina Georgieva, the compromise candidate
A former head of the World Bank’s office in Moscow and fluent in Russian, Kristalina Georgieva, is neutral from a geopolitical point of view. Her country, Bulgaria, is at crossroads between Eastern Europe, the Mediterranean and the Middle East. Since her nomination as EU Commissionner for International Cooperation, Humanitarian Aid and Crisis Response, she has been modest though effective.
Charles Grant, from the Centre for European Reform, recently said that Georgieva “could help the EU, as she is not as tough as Sikorski and she did not made any enemies” in Europe. And she is supported by France, the UK, Estonia and Luxembourg.