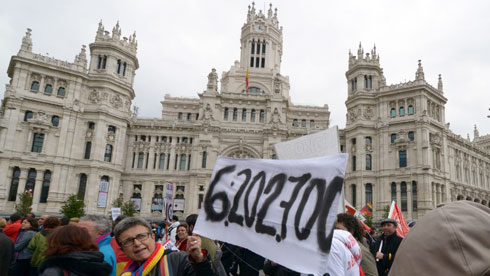 Why have the Spanish people not revolted?

Five years of crisis, 6 million unemployed and thousands driven from their homes: Despite the heavy social toll, Spaniards suffer their fate without rebelling against the government or against the EU because they fear losing what little they have left, argues a sociologist.

A banner showing the number of unemployed, at a protest in Madrid on May 1, 2013.

The fifth year of the crisis is upon us. Unemployment, poverty and social exclusion are all on the rise; reports of malnutrition in children are cropping up; tens of thousands of families have been evicted from their homes; and wages continue to fall, which can’t be said for the costs of goods and services.

What’s more, people have grasped that this situation is not a passing phase and can still stretch on for a few years yet. Given all this, why has there been no social explosion? Why has the system not collapsed? How much can Spanish society endure without an uprising?

It is hard to think of a combination of conditions more favourable for bringing about an explosion. First, the effects of the crisis are terrible. How can a population survive with 6 million unemployed? The worst is that unemployment will keep growing as domestic demand is depressed. The savings and the subsidies that have kept many going so far are being depleted. Among those who do have work, many are earning subsistence wages in the underground economy.

Second, the savage austerity policies that Spain and the European Union are pursuing are only pushing the country onto the scrap heap and putting off the day of recovery. In place of consumption and state investment combatting the fall in household demand, the government is cutting administrative expenses across the board. This is not only worsening the crisis, but decreasing social coverage for the unemployed and the poor.

Although it sounds a little brutal, the EU and the government have deemed that the road out of the crisis passes through the general impoverishment of the majority of the Spanish people. “Internal devaluation” does not mean anything else.

Third, there is a growing perception that way the sacrifices are being shared out is enormously unfair. The bloodiest case, but certainly not the only one, is the evictions. The state handed out generous aid packages and is getting dangerously into debt to restructure the banks, but has no solution for all those who have been trapped by the mortgage crisis. The insensitivity to this situation of the public authorities and of the two big parties has helped fuel the sense of outrage across much of society.

Fourth, at the moment there is no light at the end of the tunnel. Despite the propaganda of the government about the upcoming recovery, the people have grasped that we are in the midst of a very long process of stagnation and the government is failing to anticipate the very difficult years ahead of us.

Finally, we are suffering from a corrupt and astonishingly inefficient party in power. Incredibly, at a moment as serious as the present, the head of the government is being blackmailed by charges of illegal financing of the political party that he leads.

Despite all these calamities that I have listed, the people are not rising up. What exactly is going on here?

On the one hand, there are no longer any alternatives. There is no ideology today that proposes a path distinct from the one we are on and that can marshall an effective resistance. The people are dominated by rage, which translates into rejection of and alienation from the economic and political system – but that rage has failed to crystallise into a movement that amounts to a collective threat to that system.

On the other hand, despite the widespread impoverishment, Spain continues to enjoy a considerable level of development. Developed democracies, as we know, are extremely stable and put up with almost anything. The stability is astounding: never has there been a democracy with a higher per capita income than the Argentina that collapsed in 1976.

Even after the crisis of these past years, Spain has a per capita income well above that. Tensions and violent episodes are therefore expected, but no widespread collapse. This is partly because the state is very powerful and can put a brake on protests, and partly because many families own their flats or have their savings in stocks and are unwilling to set out on adventures of uncertain outcome. At all levels, development brings in its train a higher level of political conservatism.

The clearest symptom that the people, no matter how angry they are, are averse to risks is the absence of a public debate in Spain about the wisdom of staying in the euro. Despite the fact that the monetary union has turned out to be a mousetrap, almost no one wants to assume the short-term costs of leaving the currency. Strangely enough, people are directing their criticism at the parties and institutions of Spain when much of the problem is higher up, in the rules for the functioning of the euro and in the policies set by the northern countries. True, the European Union institutions have lost much of their status in the eyes of the public, but without too many consequences: the support for the euro continues to be massive. And it’s that support that is key to understanding why there has been no collapse.

When all is said and done, we will continue to resign ourselves to a situation that, no matter how you look at it, is intolerable.