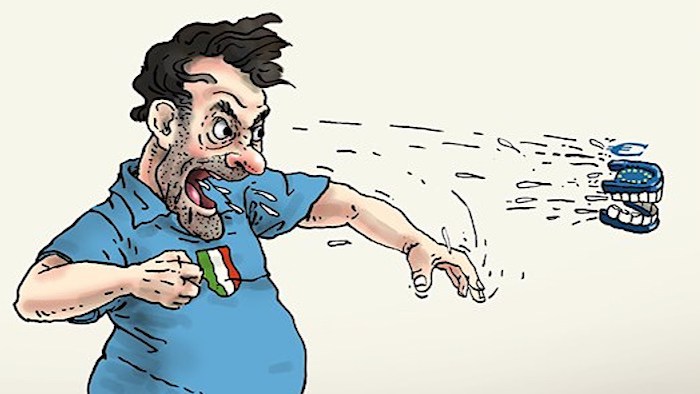 Why Italians are fed up with Europe

The rise to government of Eurosceptic parties is the consequence of austerity policies made in the name of cleaner public finances and of the euro convergence criteria.

Two Eurosceptic forces are now governing Italy. On one hand the 5-Star Movement, the anti-system party of Luigi de Maio founded by the humorist Beppe Grillo. On the other, far-right xenophobic Liga led by Matteo Salvini. How could this have happened? How did one of the European Union's six founding members, host of Treaty of Rome in 1957, and for a long time the EU's most Europhile country, give a parliamentary majority to groups so hostile to European integration?
The migration issue clearly played an important role. The inability of European countries to show the slightest solidarity towards states, including Italy and Greece, in the front line of the migrants' passage, obviously boosted Euroscepticism. In this respect Manuel Valls and Emmanuel Macron both share heavy responsibility, given their obstinate refusal to let France take its share of the migrants who have arrived in Italy.
But economics has also played a non-negligible role, in particular the austerity policies imposed across the euro zone since the Maastricht Treaty of 1992. It is true, of course, that much of Italy's difficult situation can be attributed to longstanding internal causes, including state-sector inefficiency and widespread corruption by organised crime. Nonetheless, economic policies imposed at the European level, notably within the euro zone, have hampered Italy's efforts to solve its structural problems.

It should firstly be noted that, for a quarter-century now, successive Italian governments have conducted strict austerity policies. Stricter even than those of German governments during the same period.
This can be seen if we follow the so-called primary balance of public spending, or the balance of all spending except on interest payments on public debt. Italy's primary balance has almost always been positive since the early 1990s, and at high levels. Even in 2009, during the worst of the economic crisis, the primary balance was only slightly negative, at a time when much of Europe was in the red.

If Italy is facing serious difficulties, with an unsustainable amount of public debt (currently 132% of GDP), it is not therefore because of a particular laxness on spending. On the contrary, it is because this permanent budgetary austerity, with its excessive downward pressure on spending, has put a brake on the economy and hampered reforms to make the state more effective and performant.
As a result, the combination of weak GDP growth and low inflation has, in Italy as elsewhere in the euro zone, prevented debts from falling despite primary budget surpluses.

In addition, following the 2008-09 crisis, Italians were model students of the austerity policies advocated from 2010 by Angela Merkel and Wolfgang Schäuble. Whereas the early 2000s saw a worsening of Italy's external trade deficit (-3.4 percent of GDP in 2010), Italians have tightened their belts considerably since, reducing their consumption. Last year Italy boasted an external trade surplus of 2.8 percent of GDP. By comparison France's external balance that year was still in deficit by 3 percent of GDP.

This deep and prolonged austerity has prevented meaningful reduction in Italy's unemployment, despite a low oil price and the European Central Bank's expansive monetary policy. In particular, the situation of young Italians is one of the worst in Europe, explaining their mass exodus abroad, which in turn has reduced Italy's supply of young and qualified labor and limited the prospects for a future turn-around.
In short, and notwithstanding the myth particularly popular in Germany, it is wrong to attribute Italy's problems to insufficiency budgetary rigor. On the contrary, the problem is that austerity has gone too far. In such conditions it is hardly surprising that Italians ended up trying to escape their straitjacket by calling, unfortunately, on political forces which pose major worries for the future of their country and Europe.