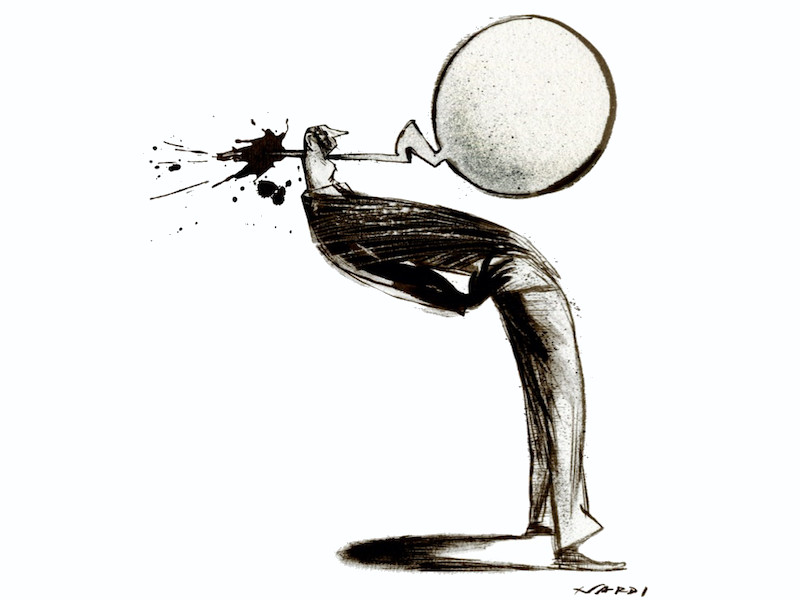 The winners of the Libex 2020 competition

The three winners of the Libex 2020 satirical cartoon competition for freedom of expression were announced on 26 September at the Lectorinfabula festival in Conversano (Italy).

The three winners of the Libex 2020 satirical cartoon competition for freedom of expression were announced on 26 September at the Lectorinfabula festival in Conversano (Italy) – of which Voxeurop is a partner.

The prize is a reminder that freedom of expression, like other fundamental rights, is not guaranteed forever. Several French media have also reminded of this recently, as the trial of the accomplices of the perpetrators of the January 2015 attacks against Charlie Hebdo is taking place in Paris.

Seventy years ago, on 4 November 1950, the representatives of the Council of Europe Member States – a new European organisation created the previous year – signed the European Convention on Human Rights in Rome. Article 10 made binding the respect of freedom of expression in the present and future Member states of the Institution. It was an anniversary that deserved to be celebrated and and motivated the theme of the competition "Freedom of expression and political satire in danger".

It is worth remembering the dangers faced by journalists and cartoonists, not only in countries with autocratic regimes, but also in our old democracies that invented this human right as the foundation of democracies. According to Terry Anderson, deputy executive director of Cartoonists Rights Network International (CRNI), who monitors threats and abuse against cartoonists, since 1999, more than a hundred cartoonists have been victims of “murder, assault, kidnapping, physical intimidation, imprisonment, arrest, travel bans, police harassment, political lawsuits, asset freezing or seizure, vandalism, cyber-attacks, online harassment, blacklisting and bullying”

The idea of the Euro-Mediterranean Centre Librexpression-Fondazione Giuseppe Di Vagno (1889-1921), in collaboration with Cartooning for Peace and the multilingual web-journal Voxeurop, was to organize an international competition on the theme of freedom of expression in a different way than usual.  Taking film festivals’organization as an example, 160 cartoonists were selected and invited to participate, all artists publishing in the media of each of the current 47 Council of Europe Member States. All of them are highly reputed editorial graphic journalists. They responded in 118 from 32 countries, sending 287 editorial cartoons. A jury of 9 members, including 6 cartoonists of international reputation: Rayma (Venezuela), Cristina Sampaio (Portugal), KAL (USA), KAK (France), Michel Kichka (Israel), Khalid Gueddar (Morocco); 2 journalists: Catherine André (Voxeurop), Carlo Gubitosa (free-lance and author of graphic novels scenarios), chaired by Thierry Vissol (Librexpression), had the very difficult task of selecting the 55 semi-finalist cartoons, then the ten finalists and finally the three winners.

The quality of the invited cartoonists made the jury's task incredibly difficult. From my consolidated experience as president or member in many political satire competitions, I have rarely seen such high quality, and so many new ideas on the difficult subject of freedom of expression. This is also stressed by Kak (cartoonist and president of Cartooning for Peace) and Catherine André (journalist and co-founder of Voxeurop), in their video messages for the award ceremony. Sometimes it was very difficult to choose one out of the 2 or 3 cartoons sent by the same artist. However, while the choice of the semi-finalists and, even more so, that of the finalists was a real puzzle, the jury chose unanimously the three winners. Their three contributions sum up in an exemplary way the main dangers faced by journalists and cartoonists and their resilience.

The third prize went to Joep Betrams (Netherlands), master of the editorial cartoon, capable of dealing both with the great circus of the often ephemeral political current affairs and with the social issues and trends of our complex modern societies, always with great technical skill and irony full of humour. Rare are the cartoonists capable of making people smile on such difficult topics. The head of his character stuck in a cardboard box (his "speaking box"), like an ostrich in front of danger, well illustrates a deep evil of our democracies dominated by political correctness and by the fury of the wild hordes raging on social networks : that of self-censorship. Many, like this mitläufer, this member of the silent conformist and gregarious majority, prefer to speak only to themselves for fear of the consequences of what they would be able to say. This attitude is unfortunately also becoming increasingly widespread among information professionals.

The second prize was awarded to Agim Sulaj (Italy/Albania), master of art, with a powerful cartoon of exceptional graphism, in which his mastery of drawing explodes. A symbolic work that goes well beyond the theme of freedom of expression. It represents an enormous threatening hand, ready to crush the small one of the cartoonist. And yet, this small hand manages to take hold of its attacker's index finger and turn it into a fountain pen to write freedom. Symbol of all the Davids against the Goliaths, capable to return the strength of their oppressor in a weapon against them. The strength of the pencil against the Kalashnikov.

The first prize goes to Marilena Nardi, immense artist recognized worldwide, endowed with a very strong personality and a unique style, thanks to a cartoon on the border between caricature and work of art. A drawing full of energy, of extraordinary power and impact and at the same time of a great graphic complexity behind its apparent simplicity. It remembers at what point freedom of expression, the critique of political, economic, religious and social powers can lead to repressions of all kinds, from bullying and social threats, to physical execution, symbolized by the point of the bubble used in comics to write the dialogues, which like a rifle bullet, pierces his character's face, to explode into a thousand pieces.

Congratulations to the winners, finalists and semi-finalists and thanks to all the cartoonists who agreed to compete.

The cartoons of the 55 finalists, exhibited in the castle-museum of Conversano from 25 September to 6 December, are published in a printed catalogue, in colour, available at the Giuseppe di Vagno Foundation at the price of € 10- (plus shipping costs).

Categories
Justice and fundamental rightsThe media and freedom of informationEurope