Press cartoon of the week Attacks in Copenhagen 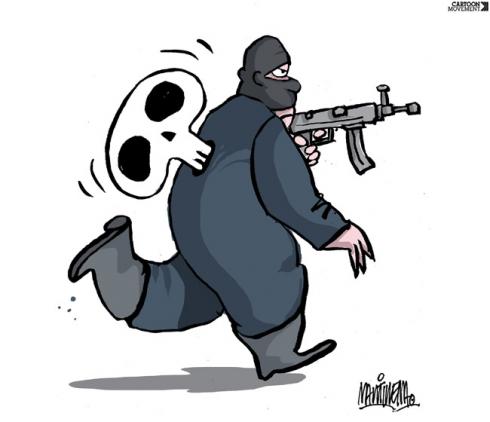 Press cartoon of the week Attacks in Copenhagen

Wound up and ready to strike

Omar Abdel Hamid el Hussein, a Danish citizen, killed two people in lone-wolf attacks in Copenhagen on 14 and 15 February. The first disrupted debate over freedom of expression in a café. Held in tribute to French satirical weekly Charlie Hebdo, which was itself attacked at its Paris office in January, the debate featured the participation of Swedish cartoonist Lars Vilks, who has received death threats for his depictions of the Prophet Mohammed, as well as Danish documentary filmmaker Finn Nørgaard, who died in the attack. The terrorist proceeded to a synagogue, where he assassinated security guard Dan Uzan and wounded three other people.

El País writes that “Denmark is reliving the horror of Paris,” as the attacks bear similarities and raise fears of more such attacks around Europe. Danish Prime Minister Helle Thorning-Schmidt described the act as an “attack on our democracy”.

Denmark had previously been threatened after newspaper Jyllands-Posten published Mohammed cartoons in 2005.

You can unsubscribe at anytime *
Categories
Politics and democracyDenmarkDenmark