Report Balkans
The Macedonian, Bulgarian and EU flags at the Gjueševo border post in Bulgaria. 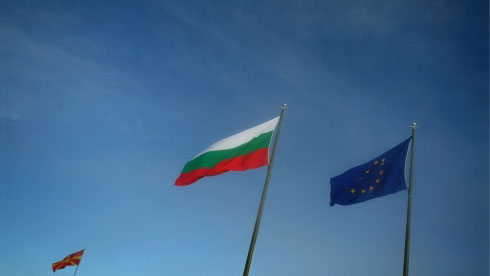 A fresh spat between Bulgaria and Macedonia

After Athens, it’s Sofia’s turn to put the brakes on the opening of EU accession negotiations with Macedonia. It’s a stance that’s stirring up nationalist tensions between the two countries and breathing new life into the clichés of its European partners about the bickering Balkans, regrets a Bulgarian journalist.

Vassil Donev / EPA  | The Macedonian, Bulgarian and EU flags at the Gjueševo border post in Bulgaria.

Bulgaria’s decision to oppose [on December 11, at a council of foreign ministers of the EU] any decision to set a date for the opening of European Union accession talks with Macedonia is very good news for the anti-Bulgarian community in Skopje. So far, the latter have not passed up a single opportunity to reel off their nationalist propaganda. Today, though, they finally have a strong argument for pushing on with their policy: Sofia has declared, at the highest level, that it does not support the proposition of its Macedonian neighbours to take an important step towards joining the European Union.

The hope that this categorical opposition would have the inverse effect – namely a weakening of those in Skopje who are opposed to good-neighbour relations – is rather unrealistic. Many consider that the current Macedonian government’s objective is not so much to gain such a date, but rather to ensure that the lack of progress can be blamed on the “awful neighbours”, i.e. Bulgaria and Greece.

But did the authorities in Sofia really have a choice? Could they, in face of the provocations from Macedonia, really support – and even lobby for – accession for Skopje in the way Poland went to bat for the Baltic States, Greece for Cyprus and today Romania for Moldova? The answer is, unfortunately, no. They would then be a legitimate target of our own nationalists, who have continuously called for the resignation of Foreign Minister Nikolai Mladenov for his “indulgence” of countries like Macedonia, Serbia and Turkey.

In their desire to divert the public’s attention from the real problems by focusing on relations with neighbouring countries, the nationalist populists of Skopje have found, as paradoxical as it may seem, excellent allies in Bulgaria. Those are the people we might call the “go-to commentators” on Macedonian questions – a handful of public figures who have set themselves up as experts and to whom the media are used to turning for commentary on the relationship between the two countries. I am not a fan of conspiracy theories, but it turns out that, apart from their interest in Macedonia, all these people are known to have belonged to the secret services of communist Bulgaria.

Just as officials in Skopje have managed to rouse a large part of the population against Bulgaria, these Bulgarian commentators have ensured that the majority of their fellow Bulgarians regard with derision, even animosity, the European aspirations of the Macedonians. That's the worst of it. Because it is these same Bulgarians and Macedonians who suffer most from these bad relationships. These stupid quarrels lead to a stagnation of economic relations and a freeze on major common projects that could really change people’s lives, such as the building of a railway from Sofia to Skopje.

Thus, if Macedonia and Bulgaria do aspire truly to better relations, the two countries should focus on these joint projects, which will allow those who live on both sides of the border to enjoy the “fruits of their labour” and to “love again as brothers”, in the words of the poet Nikola Vaptzarov [1909-1942, one of the heroes of the fight against fascism in Bulgaria] whose legacy should serve more to bring the countries together, not divide them – as was the case until recently [as with other Bulgarian historical and literary figures, Skopje claims “Macedonian origins” for Vaptzarov].

And finally, it would be good if, rather than sling accusations at each other, Macedonians and Bulgarians would try to imagine just for a moment how Europeans view the controversy between them. In European eyes, these are “typically Balkan” quarrels. That, unfortunately, is a qualification loaded with criticism, as everyone is aware of the fratricidal wars that have ravaged our peninsula.

In the long run, neither country has any interest in pursuing these quarrels. And the sooner Bulgarians and Macedonians grasp that they are digging themselves into a dead end, the better it will be for their future in the European Union. Pressure should now be brought to bear to settle the issues before March 2013, so that Macedonia can have a date set for the start of negotiations with Brussels, and so that Bulgaria can become a sincere ally on Macedonia’s road to Europe.

Disputes over the heritage of history

Bulgaria “is digging the grave of Macedonia”, argues Macedonian television's Kanal 5. “The Bulgarians are doing the work of the Greeks,” protests the daily Vecer referring to the historic opposition of Athens to any recognition of the country under the name “Macedonia”, which Greece claims encroaches on its own geographical and cultural origins. Sofia has now taken the lead from those in the EU who do not want to let in Macedonia, which has been cooling its heels in the antechamber in Brussels since 2005, the newspaper says. Going one better, Macedonia’s pro-government daily Nova Makedonija calls it “a stab in the back.”

Bulgaria, which was the first country to recognise Macedonia’s independence in 1992, has justified its refusal by pointing to a revival of the “nationalist rhetoric” in Skopje, where Bulgaria perceives and denounces a “discriminatory attitude” towards its citizens, including its businessmen. According to Bulgaria, the tension between the two countries is mainly due to the populist politics of the Nikola Gruevski government, which is seeking to prove the “ancient origins” of Macedonia by appropriating large parts of the history of its neighbours, including paternity of the Cyrillic script.

The Bulgarian authorities often cite the example of the highly controversial “Skopje 2014” project, which saw dozens of monuments (a giant equestrian statue of Alexander the Great and also of the Emperor Justinian and King Samuel of Bulgaria), erected in the Macedonian capital. A film, The Third Half, produced with the support of the Macedonian government in 2012, also provoked the wrath of Bulgarian MEPs, who saw in it a striking illustration of the “anti-Bulgarian campaign” underway in Skopje.

The Bulgarian veto, however, has also provoked regrets, even misunderstanding, among pro-European circles in Macedonia. “Bulgaria is the best friend and ally that Macedonia could have on the international scene. Rather than impose conditions, Sofia should behave like our big brother, capable of helping and guiding us,” said political scientist Zhidas Daskalovski on Bulgarian state radio.